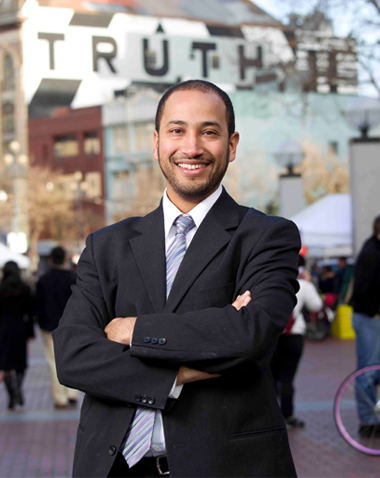 Candidates for San Francisco’s District 5 supervisor seat squared off at a forum this evening, with the incumbent and one of her challengers each fending off questions afterward about recent controversies.

The district, consisting of the city’s Haight-Ashbury, Western Addition, Fillmore, Hayes Valley and other neighborhoods, is represented by Christina Olague, who was appointed in January by Mayor Ed Lee.

Olague replaced Ross Mirkarimi, who was elected sheriff last November but then was suspended by Lee in March after pleading guilty to misdemeanor false imprisonment for an incident in which he grabbed his wife’s arm during an argument, causing a bruise.

Olague was one of four supervisors who declined last week to uphold official misconduct charges against Mirkarimi, who was reinstated since the 11-member board needed nine votes to permanently remove him from office.

The decision drew the ire of the mayor, who said Olague and the other dissenting supervisors “sought out an excuse for an inexcusable act.”

The vote and the sheriff’s case was mostly ignored at tonight’s debate, held at the University of San Francisco, besides a statement by fellow candidate Thea Selby that “in the last 10 days, our city is mirroring what’s going on in the nation as a whole” by not giving proper respect to women’s rights.

Selby, a small business owner and neighborhood activist, said she was spurred to run for office after a double murder in her Lower Haight neighborhood in 2007 and pledged to make the district one that is “safer and thriving.”

Olague defended her vote while speaking to reporters after the forum, saying she thought “there wasn’t enough there” in the legal argument to convince her to oust Mirkarimi from office.

“It’s been very stressful for everybody,” she said, adding that the issue of domestic violence is “overly politicized right now.”

The other candidate dealing with recent controversy is Julian Davis, former board president at the Booker T. Washington Community Service Center.

Davis is accused in an SF Weekly article published today of a groping incident involving a colleague several years ago.

He denied the allegations and questioned the timing of them three weeks before the Nov. 6 election.

“It’s an 11th hour political hit,” Davis said to reporters after the forum.

Declining to comment on either controversy was London Breed, executive director of the African American Art & Culture Complex in the Western Addition and the fourth candidate to participate in tonight’s forum.

“It’s important for us to move on,” Breed said.

She touted herself during the forum as a native of District 5.

“I think it’s important that I grew up in the district,” Breed said. “I understand the history of what the neighborhood used to be like … and will make sure we’re not leaving people out of the equation.”

District 5 is considered one of the more progressive districts in the city.

Other candidates in the race who did not participate in the forum include John Rizzo, a member of the City College of San Francisco Board of Trustees, Hope Johnson, former chair of the city’s Sunshine Ordinance Task Force, defense attorney Daniel Everett and public health advocate Andrew Resignato.