Big on Slam but Light on Body: The Elaborate Entrance of Chad Deity at Aurora Theatre Co. 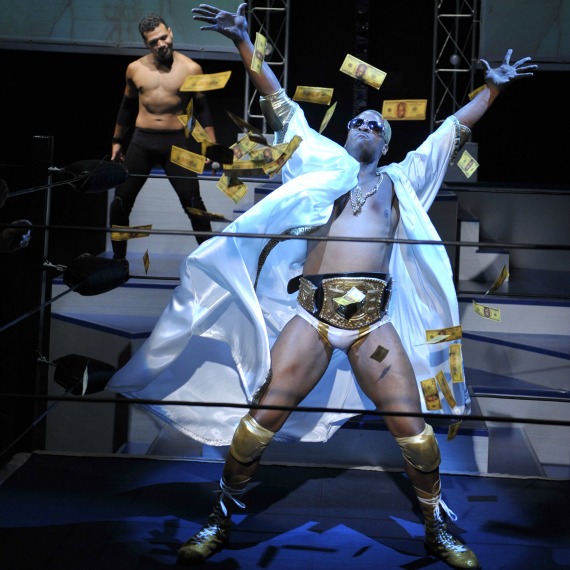 In spite of the dramatic art form’s possibilities, theater goers – a population that tends to fall few standard deviations above the 18 – 35 demographic – continue to clamor for what playwright Kristoffer Diaz terms “people-on-a-couch” plays.

So oldies and goodies like Edward Albee’s A Delicate Balance, The Aurora Theatre Co.’s stellar season opener last year, continue to come around. But Diaz is not interested in those.

This year, Aurora decided to award Diaz’ boisterous and critically acclaimed play, The Elaborate Entrance of Chad Deity, the season opener spot. There were certainly grumblings, even vitriol, during intermission; in this play, there are no couches. Rather, there are men in shiny spandex briefs, scantily clad women on video screens and an elevated boxing ring. This is the world of Pro Wrestling Entertainment.

Macedonio Guerra (Tony Sancho) guides the audience in and around the story of his late career as television wrestler “The Mace.” Dutifully accepting the role of necessary loser, Guerra routinely suffers humiliating defeats – the results of Power Bombs, Super Kicks and the like – in order to balloon the massively marketable personas of pudgier, less capable athletes. Foremost among them is Chad Deity (Beethoven Oden), the thoroughly corporate league’s swaggering superstar.

The plot turns with the arrival of Vigneshwar Paduar (Nasser Khan), a newcomer whose streetwise bravado and brown complexion earn him entrance into the league as a racistly crafted specter monikered “The Fundamentalist” – introduced as Deity’s ultimate antagonist. Guerra comes into the role of Paduar’s fictional manager, also a stereotype patchwork: Che Chavez Castro. A spectacular satire (had you guessed?), applicable to facets of American culture from entertainment to politics, ensues.

Substantively, the play is pretty light, its catch-all satire too superficial to have any real bite. For send-ups of capitalist spectacle and the commodification of racial stereotypes, Sidney Lumet’s film Network, which predates The Elaborate Entrance by over thirty years, still has the play thoroughly beat. Dialogue is not Diaz’ strongest suit; if he ever were to make a people-on-a-couch play, I would steer clear.

Like its title character, though, The Elaborate Entrance of Chad Deity makes no bones about putting style first. Diaz eschews the formal mandates of modernist theater for an inclusive multimedia spectacle that situates traditional monologue storytelling amid audience interaction, cinematic close ups using live video streaming and recorded material, and, importantly, actual body slams. The Elaborate Entrance of Chad Deity is engaging and fun, and there’s something to be said for that.