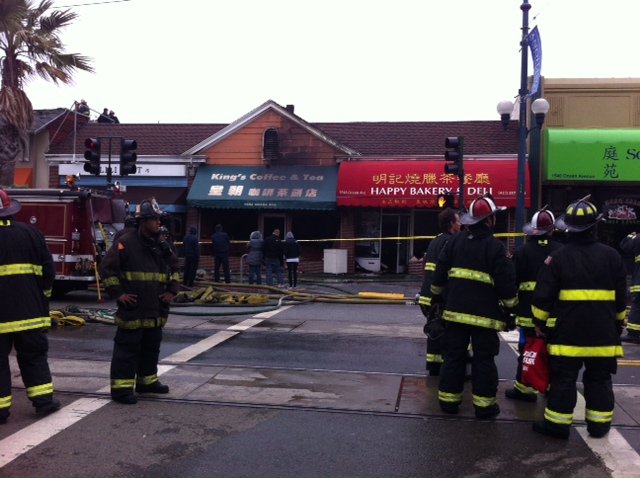 9:31 AM:
Two firefighters were injured and a number of businesses were damaged in a four-alarm blaze on Ocean Avenue in San Francisco’s Ingleside neighborhood this morning, fire officials said.

The fire was reported at 5:50 a.m. by residents on Southwood Drive, but when firefighters responded, they saw the flames were coming from the rear of a row of businesses in the 1500 block of Ocean Avenue, Fire Chief Joanne Hayes-White said.

One firefighter suffered a medical emergency while battling the flames, and another suffered a shoulder injury. Both are expected to survive, Assistant Fire Chief Tom Siragusa said.

Siragusa said firefighters encountered dangerous conditions in the fire, including a backdraft when they opened a door and there was “virtually an explosion” because of all of the smoke and energy that came into the room.

Hayes-White said, “The conditions were challenging, but the crews did a very good job.”

Up to nine businesses on Ocean Avenue may have sustained some sort of damage, from the Happy Bakery and Deli and King’s Coffee & Tea on the eastern side of the block down to a Walgreens on the western end, Siragusa said.

He said the fire reached so many businesses because many share attic space in two adjacent buildings.

Several homes on Southwood Drive were briefly evacuated because of the fire, and the backyard fence of one home was destroyed, Hayes-White said.

Ken Piper, who lives on Southwood Drive, said he woke up around 6 a.m. and “could see the flames coming up” the back of the building. His home was not one of the ones evacuated.

Piper speculated that the fire may have started in one of the restaurants on Ocean Avenue. “They have kitchens in the back and a lot of oil,” he said.

However, as of 9 a.m., the cause of the fire remained under investigation, Siragusa said.

8:05 AM: Firefighters have controlled a four-alarm blaze that damaged several businesses on Ocean Avenue in San Francisco’s Ingleside neighborhood this morning.

The fire was reported in the 1500 block of Ocean Avenue, near Capitol Avenue, before 6 a.m.

One of the businesses involved, Kings Coffee and Tea, was engulfed in flames this morning. A bakery was also burning, a fire dispatcher said.

Jawad Swirky, the owner of the Fog Lifter Cafe at 1901 Ocean Ave., said the fire sent thick black smoke into the air.

Service on the K-Ingleside Muni line remains disrupted because of the fire. Bus shuttles are in effect.

6:47 AM: Firefighters are responding to a four-alarm fire in San Francisco’s Ingleside district, a fire dispatcher said.

The fire was reported before 6 a.m. and is burning at a bakery at the intersection of Ocean and Capitol avenues, a fire dispatcher said.

The KT Muni line is blocked at Ocean and Capitol avenues in both directions due to the fire, according to the San Francisco Municipal Transportation Agency.

Bus shuttles are in service from Geneva and San Jose avenues to West Portal station.