Chevron Official: “No thoughts” Leak That Preceded Blaze “would impact the community” 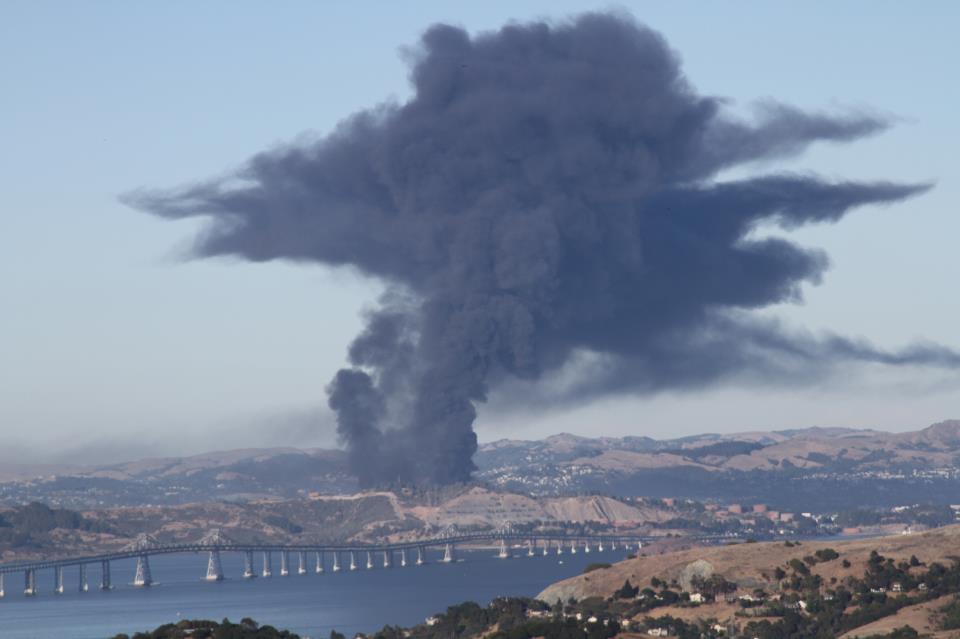 As residents of western Contra Costa County recover from the effects of a massive fire at the Chevron refinery in Richmond on Monday night, the head of emergency services at the refinery offered another apology and provided some updates on the blaze this afternoon.

Chief Mark Ayers said a hydrocarbon leak was initially detected in the No. 4 crude unit at about 4:30 p.m. Monday. He said the leak was minor, and was dripping about 20 times per minute.

When asked about why Chevron didn’t notify county health officials about the leak, Ayers said there were “no thoughts it would impact the community.”

After the leak was spotted, workers began assessing it and putting together a plan to stop it, Ayers said. The leak grew larger at 6:30 p.m., and employees, trained to avoid putting themselves at risk, left the area, he said.

As it expanded, it created a “big vapor release and ignition,” Ayers said.

Residents in the area reported hearing explosions around the time the fire started, but Ayers didn’t address those reports.

Contra Costa Health Services was notified of the fire by 6:40 p.m., said Randy Sawyer, chief environmental and hazardous materials officer for the agency.

He said about 18,800 calls went out over the agency’s automated emergency phone alert system, he said.

The fire was contained shortly before 11 p.m., and a shelter-in-place order that had been issued for Richmond, North Richmond and San Pablo was lifted.

As of this morning, more than 450 people had been treated for respiratory issues at Kaiser Permanente in Richmond and Doctors Medical Center in San Pablo, Sawyer said.

Ayers said more fluid is safely being burned off today so there is no threat of another ignition. That small fire, which he described as about the size of a basketball, could be burning for as long as a day, Ayers said.

The cause of the leak is under investigation and Ayers said it could take “a little time to assess damage to the facility.”

The No. 4 crude uit will be shut down for an undetermined time, Ayers said. The other units, some of which are fed from that unit, will remain running, he said.

Chevron is holding a community meeting at 6 p.m. today at the Richmond Memorial Auditorium at 403 Civic Center Plaza.

Among those attending will be Richmond Mayor Gayle McLaughlin, who said she has been hearing from many angry residents.

“I’m concerned, I’m upset, I’m frustrated … I really want to get to the bottom of this and want Chevron to be forthright in providing all the details of their investigation as it goes forward.”

McLaughlin said the community also needs answers about what appear to have been problems with the county’s emergency alert system.

“That’s another flawed aspect of this whole situation, people didn’t get notified,” she said.

“My home was never called.”

McLaughlin said she lives in the Richmond Annex neighborhood and that it is unclear which neighborhoods were targeted in the telephone alert.

“The community response system, the siren system. All that needs to be tightened up,” she said.

McLaughlin plans to attend the kickoff of the city’s official National Night Out celebration in the parking lot of the Target store on Macdonald Avenue, then head to the meeting.