Theaters of War: Salomania at the Aurora Theatre 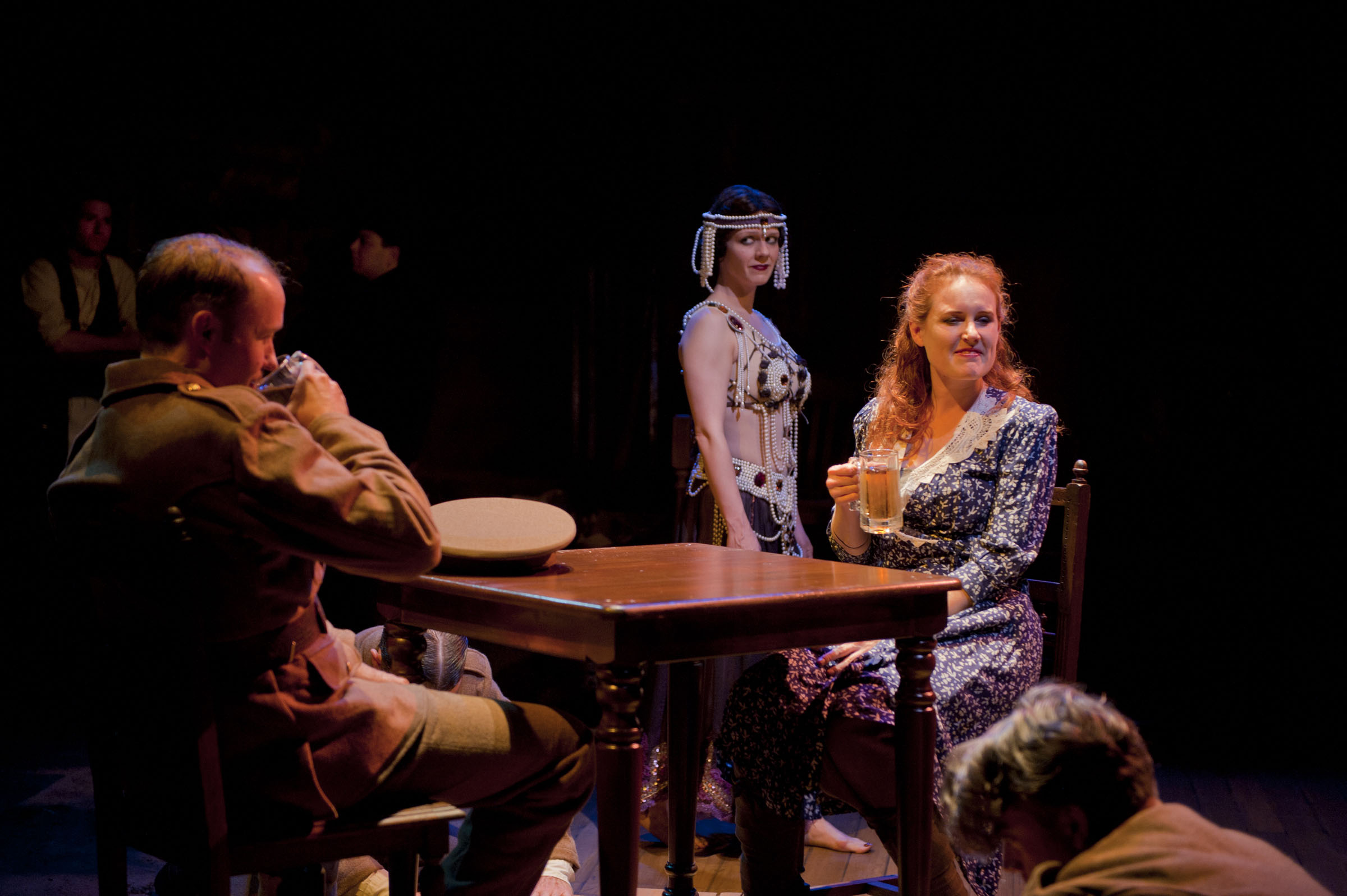 The word “theater” has a curious place in the vocabulary of war, where it means something like “arena” (WWII was split between the Pacific theater and European theater, for example). For something as bloody, horrific and, to throw out the easy word, real as war, one would think we would have settled on a word with less fanciful connotations.

Peculiarities such as this are prone to harbor hidden truths, though. During the central scene in Salomania, a World War I soldier on temporary leave (Alex Moggridge) drinks a pint with a female companion (Marilee Talkington) who has dutifully made herself available “to help him forget where he’s going back to.” At one point, she asks whether he ever thinks of becoming an actor.

“That would be redundant,” he replies, enigmatically. By way of explanation, he later adds “there’s something theatrical about sunset over no man’s land” – no man’s land being the trenches.

Meanwhile, London is distracting itself from “no man’s land” with a spectacle of its own: a libel case brought by American dancer Maud Allan (Madeline H.D. Brown) against sensational magazine editor Noel Pemberton-Billing (Mark Anderson Phillips) for accusing her of promoting the “Cult of the Clitoris” – what Pemberton-Billing depicts as an insidious German effort to weaken the British moral fiber by corrupting high-society Brits with German-devised sexual perversions (sodomy, sadism) – through her role in the infamously censored Oscar Wilde play, Salome. This trial actually occurred.

“I don’t want to forget what’s going on in France and Belgium,” says the soldier in response to the woman’s offer, the deliriously absurd trial proceedings in the fore of his mind. “Somebody has to remember.”

Salomania, written and directed by Mark Jackson, is a spectacular play in all senses of the word. Reeling between the trenches of World War I and an uproarious courtroom drama as funny as it is disturbing, it spins out a staggering constellation of questions relating theater and war, art and politics, beauty and brutality. In each character’s personal tragedy, it offers something in the way of answer.

Every actor except Brown is charged with playing at least two roles and Kevin Clarke plays five, including a riveting Oscar Wilde and the sassy and sarcastic Judge Darling in addition to a soldier. They seamlessly transition from the civilian theater (if you will) to the military one, tumbling out of ordinary garb and into the trenches with incredible choreography.

If there is one superfluous presence in the play, it is that of its titular character, Maud Allan. Jackson makes a few abortive attempts to flesh out Allan in the first act, providing a glimpse of her lesbian relationship with ex-Prime Minister Herbert Asquith’s wife, Margot (played by Talkington), and a showy dramatization of her brother’s dubious murder conviction and hanging – a haunting past incident that we presume to be driving Allan’s libel charges in one way or another. Both of these tidbits wind up feeling very much beside the point, and Jackson drops them fairly quickly.

In the second act, Allan is reduced to something of a specter, silently stalking about the stage in provocative Salome costume while the other characters carry on.

“The trial presses in around me, despite me,” Allan gripes in one of her few speaking lines in the play’s second half. Indeed, she is rendered an almost purely symbolic device – more a prop than a character. A scantily clad actor drifting about the stage does lend a sumptuous and hypnotic quality to the play. However, she is too much a distraction from otherwise truly compelling characters that have no need for her.

If Allan’s character redeems its purpose at all, it is in the play’s penultimate scene: a ghostly encounter between her and an ailing Oscar Wilde, who she finds seated at a café table, drinking red wine he cannot afford with the distinctly Wildean plan of continuing to do so until someone he knows invariably comes by, takes pity on him and picks up his tab.

“Art is memory,” he says, “and I’m beginning to think that war is the permanent state of man. We think it ends, but it is in fact only an intermission.” He pours himself another glass, then falls out of his dandy attire and into his soldier counterpart for one last crawl through the trenches.

Fantastically entertaining throughout and studded with scenes of profound relevance and philosophical weight, Salomania is a brilliant play as substantial as it is well composed, and the Aurora cast is, for the most part, more than strong enough to bring it to life. For a work that sets the cavalier wit of Wilde himself for its standard, it makes amazingly few mistakes.