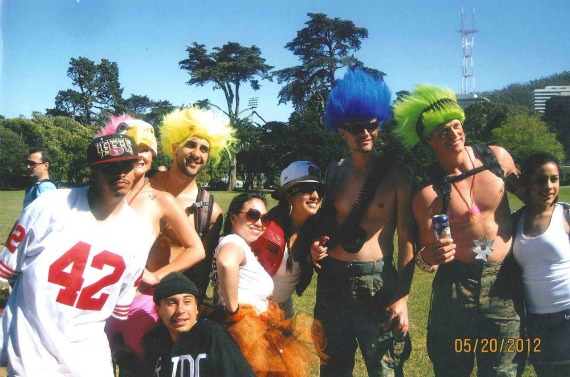 San Francisco police renewed their efforts today to learn more from the public about a fatal attack that occurred in Golden Gate Park after last month’s Bay to Breakers race.

Stephen Martin, 30, was assaulted around 5 p.m. on May 20 in the Sharon Meadow area of the park. He died Friday after being taken off life support.

Police held a news conference this morning to release more details about the attack, including two photos from that day that investigators believe include persons of interest in the case.

Martin was with a group of friends who were all wearing troll doll costumes and had attended Bay to Breakers earlier that day, police said.

At some point, Martin’s group got into an argument with a group of about 12 people, and one of the males in that group punched Martin, who fell, hit his head on the ground and lost consciousness.

Police Cmdr. John Loftus said the argument was over a cellphone but declined to elaborate.

The photos released by police show Martin wearing a green wig and standing with a group of people. Investigators are eyeing least two people in the group–a male wearing a white 49ers jersey and a female wearing an orange tutu–and are asking for the public’s help in identifying them.

Loftus said police are also seeking more footage that may have been recorded of the assault or the events leading up to it.

“People often are taking videos and photographs following the race,” Loftus said. “They may have picked up some of the assault, and that’s what we’d like to have.”

Loftus said police are also looking into whether members of the attacker’s group belong to a gang, although he said Martin was not a gang member.

“This is a tragic crime,” Loftus said. “This gentleman finished running the Bay to Breakers race several hours before. They were socializing with this group, and now he’s dead.”