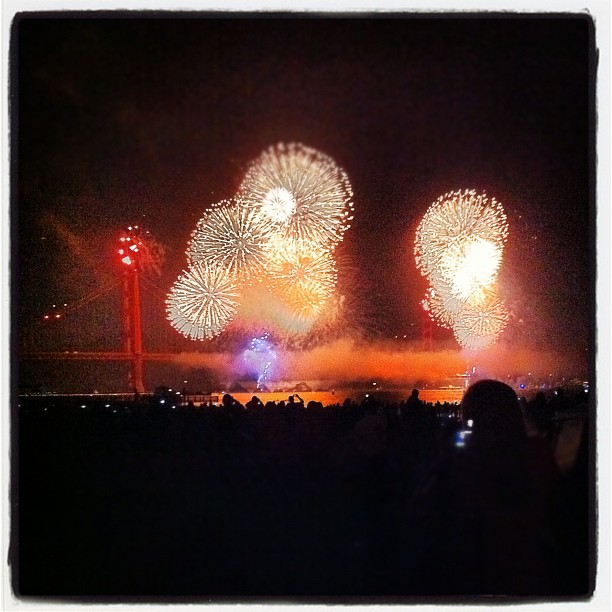 The crowd, which gathered on blankets along Crissy Field and through the Marina, oohed and aahed through the roughly 20 minute pyreotechnics display, which capped three days of anniversary celebrations. The show included songs such as “If you’re going to San Francisco” and “Bridge Over Troubled Water” and extended to the waterline in Sausalito and elsewhere in the Bay at some points.

“I thought it was fabulous, sensational,” said San Francisco resident Rosalia Schoemaker. “The opening was breathtaking, I was thinking of Niagara Falls.”

San Francisco resident Ian Paratoure, 20, called the show “very impressive,” while an unidentified reveler stated “I’m 3,000 miles from home and I ain’t never seen nothing like it!”

Following the show, the crowd began a slow, orderly dispersal to buses and cars. Muni and Golden Gate Transit provided additional transit service, but according to reports it more than an hour to clear the waterfront areas.

Extending along the waterfront from the Presidio, to Fort Point and Crissy Field to the Marina, the 12-hour Golden Gate festival featured a range of family activities and events including live music. Participants faced a relative lack of crowds at Crissy Field but chilly temperatures in the evening, packed public transit and long lines at food vendors.

San Francisco residents Stuart McIntee and Florence LeGoff were among those waiting in line for their dinner this afternoon, but they remained in good cheer.

“There should have been more food trucks, but I can’t complain,” LeGoff said. “It’s beautiful here, there’s bathrooms, I’m happy.”

McIntee said he had missed the 50th anniversary celebrations for the bridge because he was out of the country.

Those waiting for the fireworks earlier in the evening huddled in their coats on blankets, set up tents and positioned their cameras on tripods in anticipation.

Sonia Zepeda, a Redwood City resident, was camped out on a blanket near Fort Point with her 5-year-old son Esteban, her 13-year-old daughter Isabel and cousin JC Cantu. Zepeda said they had taken Caltrain and the bus, nearly an hour and a half’s ride, to reach today’s festival, and planned to stay for the fireworks.

“We come here a lot,” Zepeda said of Crissy Field. “It was like this is a birthday party.”
Cantu said they had expected to see more people but “everyone seems to be really spread out.”

Golden Gate Bridge, Highway and Transportation District officials had urged visitors to avoid driving and take public transit, and both the district and Muni provided additional service for the day.

Not everyone got the message though. Jenny Simmons, of Napa, and her mother Cindy Simmons, of Vacaville, said they had driven and parked in the Presidio. The two were carrying chairs and bags of food and drinks toward Crissy Field around 5:30 to meet other family members.

“It took us an hour to find a parking space,” Jenny Simmons said.

Business was brisk for vendors. Robert Taylor, 40, of Oakland, said he had sold around two dozen t-shirts at $10 each in about an hour at Crissy Field. Taylor also planned to sell glowsticks as the sun went down.

“Everybody gets into that fireworks spirit,” Taylor said. “We don’t only sell to kids, we sell to adults too.”

The Golden Gate Bridge’s sidewalks were expected to remain closed around 10:15 p.m. The bridge itself was closed from 9 to 10 p.m., district officials said.

The Presidio is also closed to motorists, but was expected to reopen around midnight. The Vista Point parking lots at the north end of the bridge was closed at 5 p.m. but opened after the fireworks ended.

Musical performances continued on three stages throughout the fireworks, including Mickey Hart on the Crissy Field stage immediately after the fireworks’ end.

Sunday culminated three days of celebrations that began Friday with the ribbon cutting on a new visitors center at the Bridge’s south end and a renovated historic Roundhouse.