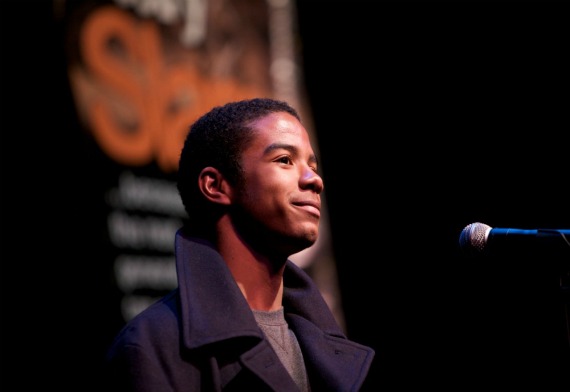 Dozens of young poets are preparing to take the stage this weekend for the semifinals of a youth spoken word competition in which Bay Area teens raise their voices and bare their souls.

That number was whittled down to about 40 young people whose booming voices will fill auditoriums this weekend as they compete for one of 12 spots in the final round on April 27 at San Francisco’s Masonic Auditorium.

Queen Shabazz, 17, a junior at San Francisco’s Lick Wilmerding High School, is one of the semifinalists.

She learned about Youth Speaks from a community outreach coordinator at school her freshman year but wasn’t too interested until she attended an open mic event in Oakland and was “blown away” by the performances, she said.

Shabazz is now a seasoned performer herself, and says her works–like those of most other Youth Speaks poets–are deeply personal.

She said her poems explore how confronting reality can sometimes be difficult.

“Even though reality can sometimes be daunting to people, I write about how we can change that,” Shabazz said.

Shabazz said she was comfortable with public speaking when she joined Youth Speaks, but getting up in front of a crowd was a challenge for another semifinalist, 18-year-old Monica Mendoza, of Oakland.

“It was scary ’cause, first of all, I never really did any public speaking before Youth Speaks,” Mendoza said.

Additionally, she said, she feels vulnerable sharing so much of herself with a large group of people.

Mendoza has written since she was a child but never shared it with anyone until she joined Youth Speaks as a junior at Oakland’s Life Academy.

She now attends Chabot College, and said the poem she performed in the preliminary rounds is about her parents and growing up as a child of immigrants.

“When I was young, people used to bother me about it,” she said.

The audience liked her piece, she said.

“It always feels amazing to share something that’s so personal and everybody being warm and welcoming,” Mendoza said. “It just felt great.”

Youth Speaks founder James Kass, a poet himself, was inspired to start the program in the mid-1990s while he was studying for his master’s degree in creative writing at San Francisco State University.

At that time, he said, there were a number of state propositions, including Proposition 187, that he felt targeted young people, particularly those of color.

He felt compelled to help those young people express themselves.

“Everybody was talking about teenagers, but there were really very few opportunities for teens to be present in their own voices,” Kass said.

It was the beginning of the dot-com boom, and he and a poet friend collected donated computers and began going to high schools offering free writing workshops. If students put in 40 hours with the program, they would get a free, used computer, he said.

The program quickly grew in popularity, and eventually, Kass said, “we didn’t need to have donated computers anymore.”

These days, Youth Speaks works with an estimated 35,000 to 40,000 students through its programs in schools, he said.

The Youth Speaks Teen Poetry Slam is one of a number of components of the program. The winners will go on to represent Youth Speaks at the national Brave New Voices competition this summer.

Youth Speaks serves mostly teens between the ages of 13 and 19. Those interested can attend one of the organization’s regular workshops or open mic events.

More information on the program and the semifinal rounds can be found on the organization’s website at www.youthspeaks.org.

The “Grand Slam Finals” will take place on Friday, April 27, at 7 p.m. at the Masonic Auditorium at 1111 California St. in San Francisco. General admission is $18, and those ages 24 or younger pay $6.