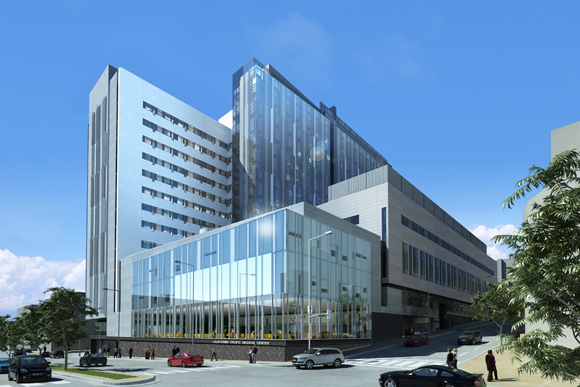 A proposal to build two new hospitals in San Francisco passed an important hurdle today when it was approved by the city’s Planning Commission.

California Pacific Medical Center is proposing a $2.5 billion project that includes five new buildings, including a 555-bed hospital on Cathedral Hill and an 80-bed facility to replace the existing 200-plus-bed St. Luke’s Hospital in the city’s Mission District.

Mayor Ed Lee and CPMC officials negotiated for about a year before reaching a tentative agreement earlier this month on the plan.

The environmental impact report for the proposal came today before the Planning Commission, which ultimately approved it this evening following a hearing that lasted several hours.

City department officials started the hearing by laying out the details of the plan, which include a 15-story hospital at Van Ness Avenue and Geary Boulevard and a nine-story medical office across the street, as well as two new buildings at the St. Luke’s campus and another one at CPMC’s Davies campus.

The current hospital at St. Luke’s would be demolished following the construction of the new hospital there.

Many construction trades workers attended the hearing in support of the proposal, including Ian Zimmerman, a student at the city’s CityBuild Academy, an 18-week pre-apprenticeship program for construction jobs.

Zimmerman said the new hospital at Cathedral Hill “will provide jobs and a seismically safe hospital in the case of an emergency.”

Jim Lazarus from the San Francisco Chamber of Commerce said the business community is also strongly behind the plan.

“This is our number one project,” Lazarus said. “Few projects in recent years have had the extensive environmental review, lengthy negotiations and community outreach that have surrounded this critically important project.”

However, many others came to speak against the proposal, including members of the California Nurses Association, a union that also held a news conference before today’s hearing to discuss its reasons to oppose the project.

Matt Vespa, an attorney representing the union, told the commission that the plan was “fatally flawed” in part because of its impact on the city’s traffic, particularly along the busy Van Ness Avenue corridor.

“We’re talking about putting a hospital on one of the most gridlocked streets in the city,” Vespa said.

He said that the environmental review is “unlawfully skewed to achieve one outcome and one outcome only … to maximize CPMC’s profits.”

CPMC chief executive officer Warren Browner spoke briefly at the hearing, telling the commission, “We’re aware this plan has its critics … but a perfect plan to please everyone just isn’t possible.”

Following more than five hours of public comment, the commission voted to certify the environmental impact report and approve the development agreement, according to CPMC spokeswoman Kathy Graham.

“Today was a great step forward for health care in San Francisco,” he said. “We have been working on this project for nearly 10 years, and today’s approval means that we are closer to building two new state-of-the-art seismically-safe hospitals.”

The proposal will now go to the Board of Supervisors, although opponents of the plan have the option of appealing its approval by the Planning Commission, which would lead to a hearing on the appeal by the board.