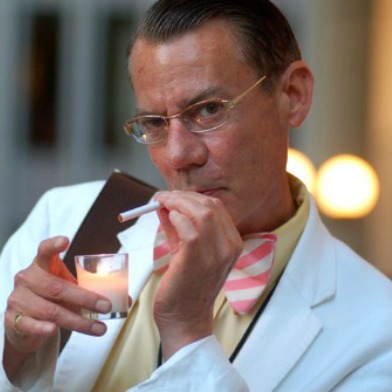 Political and media junkies will with varying levels of fondness* recall the San Francisco Sentinel. First an LGBT weekly and then a Tenderloin neighborhood paper, the Sentinel was in its latest iteration one of the city’s very first online-only newspapers, and was known as much for dapper editor-and-publisher Pat Murphy‘s spats-and-cane presence about City Hall and town as it was for its often controversial editorial slants (pro-business, anti-Chris Daly, possibly a pay-to-play political committee, and once accused of accepting money from Chevron in exchange for favorable articles.

Founding editor of local city blog SFist, Jackson West, recalls that back in the mid 00’s, The Sentinel was “considered worthy of gossip, sometimes scurrilously so, by his peers in and around City Hall. And in a business where any attention is good attention, it all counts.”

But things of late have been quiet over at www.sanfranciscosentinel.com. Illness laid Murphy low a few years back, leading him to pass the reins to his fine arts correspondent, and to finally sell off the publication last month to a public relations firm.

Phil Siegel, of MediaWorks SF, purchased the rights to the Sentinel in February for an undisclosed sum, he told the Appeal in a recent telephone interview. Why buy a new site that some may call a dormant political blog?

“It has a loyal readership, and hasn’t been used to its maximum extent over the past year,” said Siegel, noting that it went about six months without regular publishing.

Under Siegel, a PR professional for 30 years with clients ranging from the AIDS Quilt to San Francisco International Airport, the Sentinel “will continue to be a pro-gay, pro-business publication” with a special focus on the arts.

“It won’t be much on the hard news side,” said Siegel, who noted that press releases from Mayor Ed Lee as well as the America’s Cup Event Authority and SF Chamber of Commerce will likely find their way to the site, along with news of museum exhibits, society events, and theater openings. Such news is often overlooked by local media, Siegel said, so the Sentinel would be a natural home for such otherwise-lost news releases.

The plan is to post about once a day in the beginning, and “feel our way around from there,” Siegel said. “But entertainment-oriented is how [the Sentinel] has been, and that’s how it’s going to stay,” Siegel said.

Few would argue that San Francisco is exactly media-rich, so another voice can’t be a bad thing. Or can it?

“It is ethically dubious for a PR firm to own a news source without a clear general statement to the world, ‘This is what we’re doing, and why we’re doing it,'” said J. Michael Robertson, a journalism professor at the University of San Francisco, where he teaches an ethics class.

For example, whenever NBC reported on issues pertaining to then-parent company General Electric, a program would contain a disclaimer. “The key would be transparency,” Robertson said.

There’s not yet a clear mission statement on the Sentinel’s homepage, nor is there an About page that lists its current owner.

Though to his credit, Siegel was more than forthcoming about his involvment with the Sentinel. “I’ve been in the PR business for 30-plus years and I understand what’s news and what’s not news,” he said.

“Does it blur the line too much? Well, I think the line has been moving for a while.”

This is true, and could even be part of a trend, Robertson muses. “You do need new, creative ways of sourcing the news,” he said. “You just need to do it in a way that your credibility isn’t questioned.”

Which, for advertising nonprofits and museum openings, shouldn’t be that hard. So welcome back, Sentinel.

*NOTE: Your correspondent contributed photos to the old Sentinel off-and-on for a number of years, and still considers Murphy a friend. Call us, Pat!