Belief in a Power Greater than Oneself: High at SHN 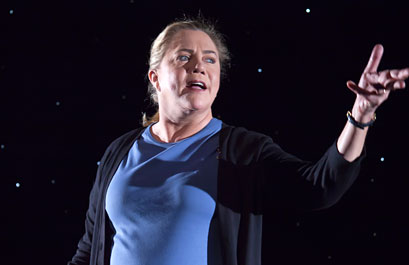 The curtain rises to reveal Sister Jamison Connelly (Kathleen Turner), standing solo. Her delivery promptly takes center stage, thrusting the content of her speech (something about her sister, childhood memories) right out of focus. She speaks with a commanding stiltedness, William Shatner-esque, and there is something additionally strange about it. It sounds like there is a marble in her mouth that her husky voice must struggle to maneuver around.

She is a nun, we discover, working at a halfway house. She’s not your traditional nun, though. She curses. She pushes back against the priest, Father Michael Delpapp (Tim Altmeyer), when she disagrees with him — which is often. And that marble? Probably the result of her years as a homeless alcoholic and prostitute. This last bit of life experience equips her to deal with the really tough cases.

Cody Randall (Even Jonigkeit) is one of them. He arrives at the house after being found half dead in a hotel room littered with syringes, a 14 year old boy, fully dead, by his side. Cody’s backstory is about as bad as you could bring yourself to imagine, or close to it – poverty, sexual abuse and addiction since grade school. The pastor, ardent about Cody’s recovery despite his being non-Catholic and homosexual, puts the boy in the charismatic Connelly’s charge.

After the first act, Connelly looks something like the standard tough-love hero — the ex-outlaw on the force whose unorthodox methods are the only hope in an unorthodox situation. It is compelling, but the trope is a dime a dozen.

Act II then takes a tragic turn into the character of Connelly. What emerges is a person about as wrecked, guilt racked and desperate for a fix as her patient, but with a seasoned ability to keep it together. The nun grinds her suffering into a column of perfect grammar, posture, sarcasm and belief in God. Throughout the play, however, we witness cracks appear.

With a cast of 3 and only one set change, Matthew Lombardo’s “High” hinges squarely upon Turner’s performance – too much so. Even a fully nude Jonigkeit, playing Cody in the hysterical grips of a violent meth high at the end of Act I, fails to completely turn the attention away from the powerful female protagonist.

As highly as this speaks about Turner’s abilities, the single spotlight ultimately lessens the play’s impact. When the curtain falls, her performance remains. The rest quickly fades.

For tickets to upcoming SHN productions, head to their box office site.