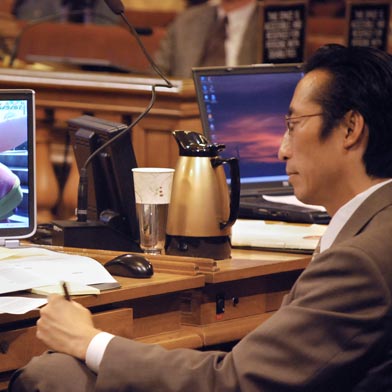 The juror pool for the trial of San Francisco Sheriff Ross Mirkarimi on domestic violence charges began being winnowed down this afternoon, but remaining in the pool is a former colleague of Mirkarimi’s — Supervisor Eric Mar.

Mar, who served alongside Mirkarimi on the city’s Board of Supervisors before Mirkarimi was elected sheriff in November, was one of 196 potential jurors who gathered Wednesday at the San Francisco Hall of Justice for initial instructions about the case.

Mirkarimi has pleaded not guilty to misdemeanor charges of domestic violence battery, child endangerment and dissuading a witness in connection with a Dec. 31 incident in which he allegedly bruised his wife Eliana Lopez’s arm during an argument.

Lopez has denied the charges against her husband.

When Judge Garrett Wong, who is overseeing the trial, told the potential jurors the name of the defendant in the case, many began murmuring to each other.

Wong noted the high-profile nature of the case, urging jurors not to post online or talk about it even though “there’s going to be a lot of temptation.”

The potential jurors then were asked if they have any hardships that would prevent them from serving in the trial, which Wong estimated would be done by March 16.

Roughly half of the 196 potential jurors declared hardships, while the other half — including Mar — filled out questionnaires asking them a variety of questions.

The questions included information about their backgrounds, their opinions on domestic violence-related issues and their level of awareness of the case, as well as whether they know Mirkarimi, Lopez and more than two dozen other people connected to the case.

Those remaining jurors will return to court at 9 a.m. Monday, when prosecutors and defense attorneys will begin weeding out people with potential conflicts or biases to finalize the 12-person jury along with two to four alternates, Wong said.

Mar said after filling out the questionnaire that he did not know when he responded to jury duty today that the case would involve his former board colleague.

“I didn’t know it was going to be this case but I had some sense it was coming up,” he said. “I guess I’ll be conflicted out, but it’s up to the judge.”

Mar said the case was “fascinating,” but he is not allowed to talk about its specifics, not only as a juror but as a supervisor.

Under the City Charter, Mayor Ed Lee has the option of suspending Mirkarimi as sheriff, which would lead to an Ethics Commission hearing and then a hearing by the Board of Supervisors, which would need nine votes from the 11-person board to remove him from office.

Mar said if he is in court all day Monday, he will miss one of his duties as supervisor–he chairs the board’s Land Use and Economic Development committee, which meets at 1 p.m. that day.

Earlier today, prosecutors and Lopez’s attorney Paula Canny sparred in court over a key piece of evidence in the case, a 55-second video recorded on Jan. 1 by the couple’s neighbor Ivory Madison that reportedly shows Lopez crying, pointing to the bruise on her arm and recounting the incident.

Canny argued that the video should be excluded from evidence because it was made under the guise of attorney-client privilege, since Madison represented herself as an attorney although she only graduated from law school and is not a licensed attorney.

Prosecutor Lindsay Hoopes countered that every single reference to Madison in statements by Lopez already in evidence have identified her as “a neighbor and friend,” not an attorney.

Wong denied Canny’s motion, saying that while Lopez may be the holder of attorney-client privilege, “the evidence is not being used against her” so the motion lacks standing.

The case is expected to return to court Friday morning when Wong will hold a private hearing with Christina Flores, an ex-girlfriend of Mirkarimi’s who filed a police report last month saying that he also abused her during their relationship prior to his marriage to Lopez.

After the meeting in judge chambers, Wong will rule on whether Flores will be admitted as a witness in the trial.

Flores’ name was excluded from the list provided in the juror questionnaire today, but district attorney’s office spokesman Omid Talai said “it’s a typographical error and we still intend on calling Christina Flores” as a witness.