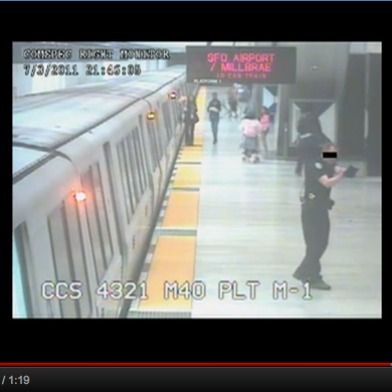 Gascon said in a seven-page report to San Francisco Police Chief Greg Suhr that based on a thorough review of the law, witness statements and medical and physical evidence, “there appears no reasonable factual or legal basis upon which to charge” Officer James Crowell for the fatal shooting of 45-year-old Charles Hill at about 9:45 p.m. on July 3.

The report was sent to Suhr last Wednesday and was made public today. Copies were also sent to BART Police Chief Kenton Rainey, Crowell and Lt. Hector Sainer in the San Francisco Police Department’s homicide unit.

Gascon said doctors who examined toxicology reports on Hill concluded that he was high on a combination of alcohol, methamphetamine and synthetic marijuana.

According to Gascon, Dr. Nikolas Lemos, chief forensic toxicologist for the San Francisco Medical Examiner’s Office, said the combination of substances had a “synergistic” effect on Hill and the combination of depressants and hallucinogens compounded the effect of each other “exponentially.”

The report said Lemos believes Hill was “a chronic methamphetamine user” and he has rarely seen people with such a high level of methamphetamine in their body who were still alive.

Dale Allen, an attorney who represents BART, said Gascon’s report “supports our belief that Officer Crowell acted appropriately and in fear of his life” when he shot and killed Hill.

Allen said he thinks “it was a proper use of force in a deadly force situation.”

But Oakland attorney John Burris, who recently filed a wrongful death and civil rights lawsuit in federal court on behalf of Hill’s family, said, “We won’t be deterred and will go forward with the lawsuit. This report has no effect on us.”

Burris said he’s “not surprised” by Gascon’s report because prosecutors must prove a criminal case beyond a reasonable doubt but in civil cases the standard is lower, only a preponderance of the evidence.

He said he’s sued many police officers and agencies in his long legal career and in only one case have prosecutors filed charges against an officer who killed a suspect.

Burris said that was the case in which former BART Officer Johannes Mehserle was charged with murder for fatally shooting passenger Oscar Grant III at the Fruitvale station in Oakland on Jan. 1, 2009.

Mehserle, who claimed he had only meant to use his Taser but fired his service gun by mistake, was convicted of the lesser charge of involuntary manslaughter.

Gascon’s report says Crowell and Officer Myron Lee came to the Civic Center station after a BART train operator saw Hill with a large liquor bottle in his hand and feared for Hill’s safety.

Hill threw a Smirnoff vodka bottle at the officers and then Crowell noticed that Hill was armed with a large knife, according to the report.

Crowell told investigators that he ordered Hill to drop the knife but he fired three shots at Hill from a distance of about 15 feet when Hill planted his foot and cocked his arm to throw the knife at him.

Crowell said he had been trained that someone who’s armed with a knife and is within 21 feet is a threat because “they can close the gap before the officer can get their gun out of their holster.”

Allen said a slow-motion video of the incident shows that Hill threw his knife at Crowell at virtually the same time that Hill shot him.

He said Crowell “was reacting to the motion of the knife being thrown.”

However, Burris said he still believes the shooting “was not justified” and said the matter is “a factual dispute that a jury will have to resolve.”

Crowell left the BART Police Department after the shooting and now works as a special agent for the FBI. Sources said that at the time of the shooting he had already applied for the FBI job and was close to being hired.