A Tale in Sound and Motion: Tontlawald at Cutting Ball Theater 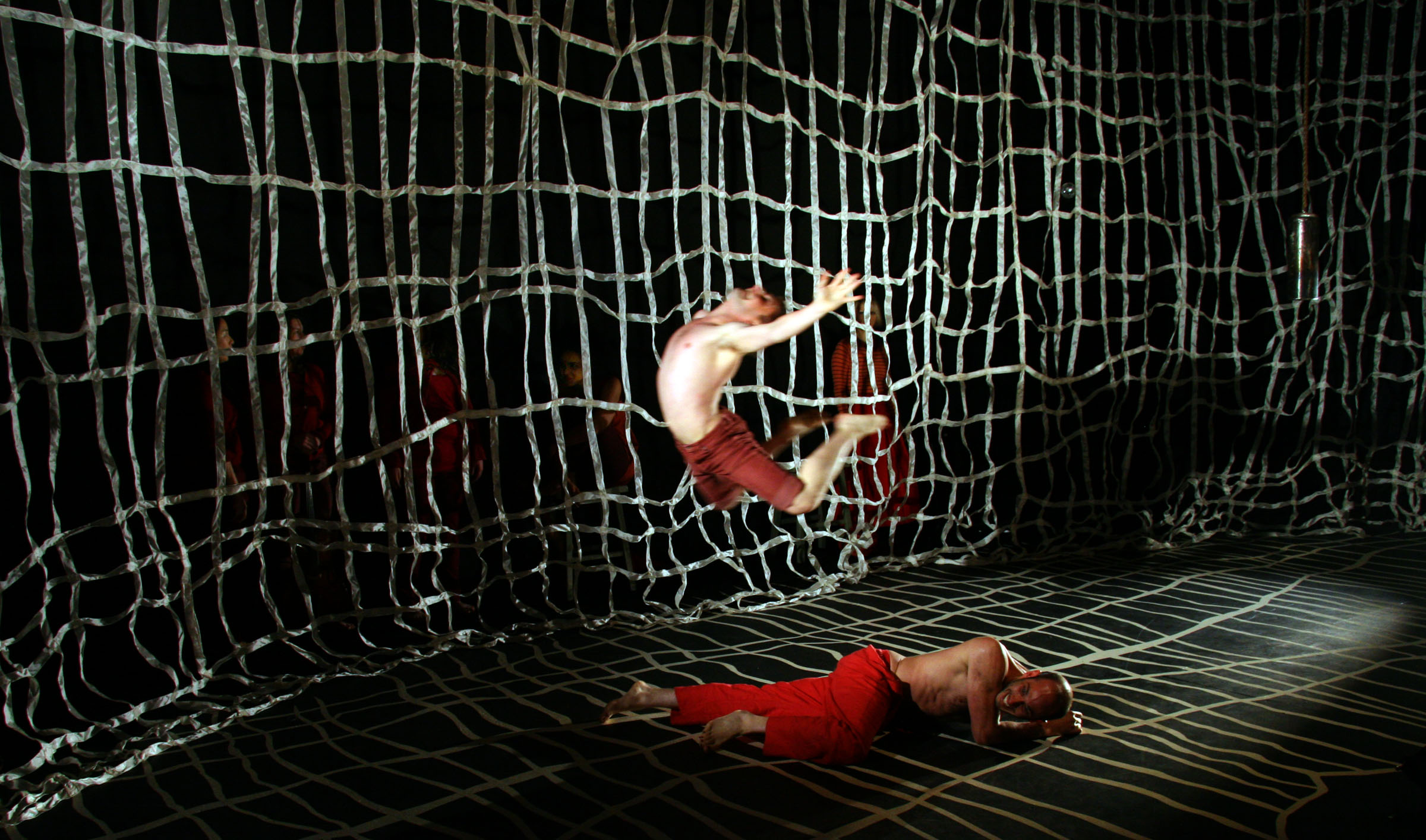 At a glance, Tontlawald, devised by Paige Rogers, Annie Paladino and Laura Arrington, might seem to be a meager play. The Estonian evil stepmother-folk tale is a wire hanger of a narrative, and Silvie Deutsch’s scenic design consists of a latticework of tarp strips, a few electrical appliances and little else. The production clocks in at just one hour, but in that time it manages to pull the audience out of life’s usual conceptual trappings, into a childlike world of rich texture and simple, intense wonder.

The tarp weave marks the boundary of the Tontlawald, or ghost forest. In this forbidden refuge, protagonist Lona (Marilet Martinez) joins a group of boisterous, barefoot youths to escape the reach of her cruel stepmom. Ultimately, the group employs magic to clone Lona and send a false, venomous copy of her back to her folks. Fairytales are typically good with solutions.

This plot hardly matters. It serves as a minimal through line for the performance’s real substance – namely, the characters’ exploration of their own bodies and the emotional textures of life in the woods (which, in fairytale land, means in the abstract), through dance and song.

The characters enact a pubescent fascination with their own bodies and those of their companions. Writhing and curling inward, roughhousing, leaping and stomping on the Cutting Ball theater’s hard, bare floor, they resemble something between caged animals and dolls undergoing a rapturous process of animation. On the sidelines, choral clusters score their movements with unearthly sounds of revelry, taunt, grave apprehension.

The play’s words waver between standard fairytale fare and a conspicuously modern vocabulary – perhaps an unnecessary attempt to relate the play to its grown up audience. Toward the end of the play, Lona lists among her dislikes “skyscrapers” and “white noise.” Earlier, the Tontlawald is described as a place of “dark matter and string theory, where everything is connected,” a line that makes some immediate sense, delivered before the white latticework and the theater’s dark walls, but which imbues the play with a somewhat unwelcome self-consciousness.

For sure, the play’s non-verbal sounds prove a better point of focus. In addition to song, the percussive effects of wild feet on floorboards, heavy breathing and grunts conjoin with the white noise emitted by commonplace appliances (a fan, a microphone) to create a tapestry of pounds, clicks and whirs. Amidst this sonic milieu, the troughs of silence, when they arrive, take on a stunning dramatic depth.

In this way, motion, emotion and sound combine to produce a palpable aesthetic language that, from an adult perspective, is endlessly more potent – and re-watchable – than a literal fairytale narrative could ever hope to be.

Tontlawald runs through March 11 at The Cutting Ball Theater, now in residence at EXIT on Taylor, 277 Taylor Street.