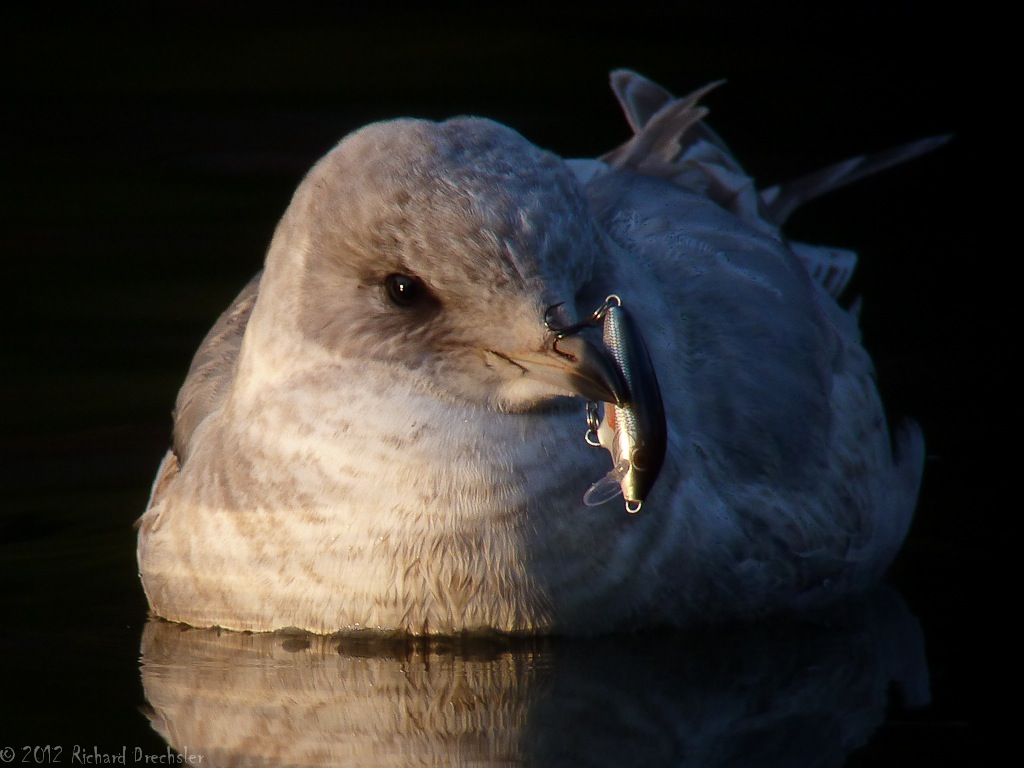 An injured mew gull with a fishing lure caught in its beak was spotted at Golden Gate Park again today, dashing hopes that it might have shaken the lure loose and recovered, wildlife rescuers said today.

The young gull was spotted by a birder at Stow Lake around 11 a.m. today, said Rebecca Dmytryk, a spokeswoman for WildRescue.

The bird was first spotted by local birders on Friday, at Elk Glen Lake and Lloyd Lake in Golden Gate Park. A search on Saturday with several volunteers failed to locate it, however, and Dmytryk said she had hoped the lure, which is caught in the bird’s nostril, might have shaken loose.

“I was hoping [the gull] wouldn’t be seen today, that it would have shaken it out, but it’s pretty stuck in there,” Dmytryk said.

Volunteers with the Moss Landing-based wildlife rescue group will make another attempt to locate and capture the bird on Monday.

The lure could make it hard for the bird to feed and to preen, or clean its feathers, Dmytryk said.

“Preening is extremely important for water birds, because if they don’t preen their feathers will let in the cold air and water, and they’ll die of hypothermia,” Dmytryk said.

If anyone spots the bird, they should not try to capture it but contact WildRescue right away at (415) 979-9700. Trained rescuers will respond.

WildRescue was also involved in the successful capture and rehabilitation of an injured red-tailed hawk spotted in Golden Gate Park in October. That hawk, which was shot through the head with a nail, made a full recovery and was released into the park in November.

Anyone interested in learning to rescue wildlife can take part in a two-day training session Jan. 14th and Jan. 15th.

Please go to www.wildrescue.org for more information on training or other volunteer opportunities, or call (831) 840-3896.