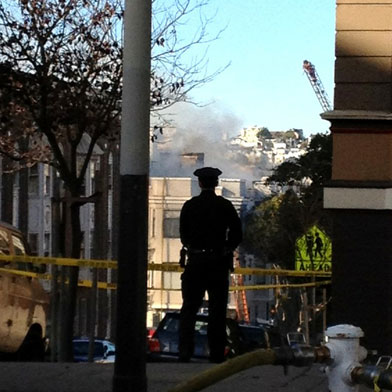 More than 40 people have been displaced by a five-alarm fire that damaged three buildings near San Francisco’s Alamo Square on Thursday, officials said today.

The Red Cross had assisted 16 people at an evacuation center set up for the fire as of Thursday evening, she said.

San Francisco fire officials this morning said they are still investigating the cause of the fire, which spread rapidly along the rear of the affected buildings and was not brought under control until shortly after 3 p.m.

Windy conditions, and the fact that the building where it started was a wooden structure attached to other buildings, made fighting the fire challenging for the estimated 140 firefighters on the scene, Fire Chief Joanne Hayes-White said Thursday.

No estimate of the damage to the buildings was available as of this morning.

The fire drew dozens of people out to nearby streets and prompted the evacuation of a nearby elderly care facility due to the heavy smoke.

The building where the fire started is adjacent to the Creative Arts Charter School. The school is currently on winter break.

The Red Cross evacuation center is located at the Missionary Temple church at 1455 Golden Gate Ave. Residents who need housing, food or other assistance are advised to go to the evacuation center or call (888) 4-HELP-BAY.

Those wishing to donate to the fire victims can contact the Red Cross at (888) 4-HELP-BAY or visit www.redcrossbayarea.org.