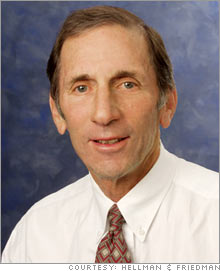 Family members and friends of San Francisco financier and philanthropist Warren Hellman came together to celebrate his life at a colorful memorial service in the city today.

Rabbi Sydney Mintz, who oversaw the memorial service for Hellman this afternoon at Congregation Emanu-El, said “there are so many places you can feel his indelible imprint.”

That sentiment was evidenced by the diverse group of speakers at the service, from Sen. Dianne Feinstein, who called Hellman a “renaissance man” who “seriously enriched” San Francisco with his philanthropic effort, to bluegrass musician Ron Thomason, who shared with Hellman a love of music and endurance sports.

“The sports he chose, if you made it to the end, you won,” Thomason said. “Warren would also help other people get there … he carried thousands of people with him to the end.”

Among Hellman’s philanthropic interests were helping to found the San Francisco School Alliance, an advocacy group for the city’s schools, and serving as chairman of the board for The Bay Citizen, a nonprofit news organization he helped found in 2010.

He also strongly supported the San Francisco Free Clinic, founded by his daughter Dr. Tricia Hellman Gibbs to provide free medical treatment to those in the city without medical insurance.

While some speakers at the service commented on his public work, family members noted his sense of humor. Hellman’s son Mick read a limerick he wrote about his father and played a song from a Monty Python movie, while several grandchildren sang a pair of songs in memory of him, calling themselves the “Go to Hellman Clan.”

Singer Emmylou Harris, who played at the first Hardly Strictly Bluegrass festival in 2001, performed two songs at the service that she said were among Hellman’s favorites.

The Wronglers, the band Hellman frequently played banjo along with at the festival, also performed at the service, including a song Hellman wrote himself called the “Big Twang Theory.”

Among the hundreds of attendees at the two-hour service were House Minority Leader Nancy Pelosi, Mayor Ed Lee and several other city officials.

Hellman has been laid to rest in Colma. In lieu of flowers, his family is asking for donations to be made to the San Francisco Free Clinic at www.sffc.org, The Bay Citizen at www.baycitizen.org, or the San Francisco School Alliance at www.sfschoolalliance.org.