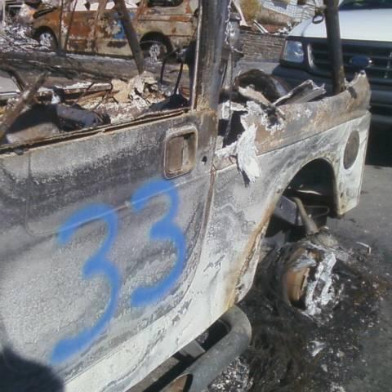 PG&E said today that it is accepting financial responsibility for a natural gas pipeline blast in San Bruno’s Crestmoor Canyon neighborhood in September 2010 that killed eight people, injured 52 others and destroyed 38 homes.

The San Francisco-based company, a subsidiary of PG&E Corp., said that means it will compensate all of the victims for the injuries they suffered as a result of the accident.

PG&E is making its announcement in response to a San Mateo County Superior Court judge’s request for its official position and comes ahead of a court hearing Friday to discuss various issues in the case.

Company spokesman Brian Swanson said, “For 14 months PG&E has been working to resolve all claims fairly and promptly.”

Swanson said the judge, who is presiding over multiple lawsuits against the utility company, “wants to make the process faster and more efficient so there is a prompt resolution.”

He said PG&E hopes to settle the lawsuits before they come to trial.

PG&E said in a statement that none of the plaintiffs, San Bruno residents or the city itself are at fault for the accident.

It also said it is committed to helping the city of San Bruno and the victims of the accident and their families recover and rebuild.

He said, “We are affirming our commitment to do the right thing in our response to this accident.”

“We would never consider holding the residents accountable for this accident,” Johns said.

He said, “Since the accident, PG&E has stood by the community of San Bruno and we will bear the cost to make things right for the city and its people.”

In a separate message to the company’s employees, Johns said, “Since the San Bruno accident, PG&E’s decisions, our culture and even our values have come under great scrutiny” and “we’ve learned a lot about ourselves, both good and bad.”

He said, “We’ve been up-front about the shortcomings of our past gas operations, while at the same time working around the clock to improve that part of our company.”

Johns said that in July PG&E received a flurry of media attention in response to a legal filing “that was misinterpreted by some to mean that PG&E was leaving the door open to somehow blame San Bruno residents or the city of San Bruno for the accident itself.”

He said, “Nothing could be further from the truth, which we stated at the time. In a follow-up filing, we clarified our position by explicitly stating that none of the plaintiffs or residents of San Bruno was at fault for the accident.”

Johns said, “Today, PG&E took another important step in this effort by agreeing that we are liable for the San Bruno accident.”

Johns said he wants to emphasize that the company’s announcement about accepting financial responsibility “was made not in reaction to any external pressure.”

He said, “PG&E is determined to learn everything we can from the accident and to use that information to change how we operate our gas business.”

He said that as a result the company has reorganized its gas operations, completed a massive effort to validate through records or hydrotesting more than 150 miles of transmission pipeline and validated the maximum allowable operating pressure on hundreds of additional miles of pipeline.