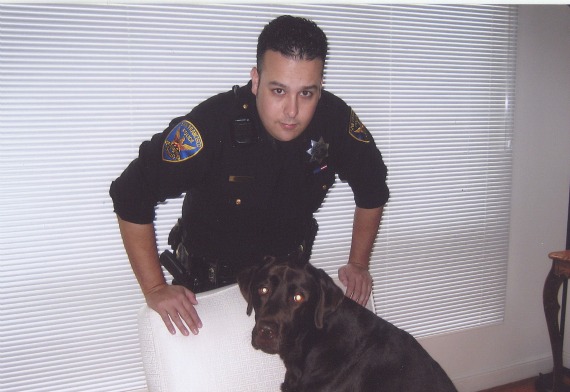 On the night of December 22, 2006, 28-year-old SFPD Officer Bryan Tuvera was shot and killed by an escaped felon in the Sunset District of San Francisco. Tonight, Tuvera’s friends, family, colleagues, and the public plan on retracing his final steps in his honor, in what SFPD says will be the last vigil for the fallen officer.

Tuvera, who friends and family say always wanted to be a police officer, and another officer were trying to serve a felony arrest warrant on Marlon Ruff, who was described as “armed and dangerous.” Ruff bolted, and the officers pursued him on foot until he broke into the side door of a residence on the 1600 block of 25th Ave, went into the garage, then opened fire at officers, striking Tuvera.

Police representatives, motorcycle units, and the SFPD horse unit are expected to join tonight’s ceremony, which will begin at 7 PM on Lawton Street at 25th Avenue.

According to SFPD, after an opening prayer by the SFPD chaplain, SFPD bagpipers will lead a candlelight walk to Taraval Station at 2345 Taraval Street at 24th Avenue, “where there will be a ceremony beginning at 8:00 P.M. featuring a series of speakers and a special flag ceremony.”

San Francisco Fire Department Engine No. 18, the SFFD engine that arrived to render aid to Officer Tuvera when he was shot, will also be present.

SFPD encourages the public to attend what will be the last candlelight vigil for Officer Tuvera. According to the Ex, “this will be the final year as cops and Tuvera’s family move on from the tragedy.”

Says the SFPD in a statement, “This is an opportunity to honor one whose devotion to duty resulted in his making the ultimate sacrifice to keep citizens safe.”