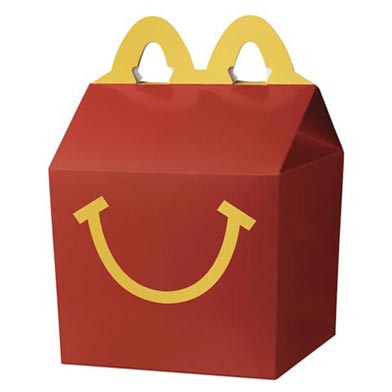 Legislation banning toys from being sold in San Francisco as part of fast-food meals that do not meet certain nutritional standards is set to go into effect in the city Thursday.

The law, authored by Supervisor Eric Mar and passed by the Board of Supervisors over the veto of then-Mayor Gavin Newsom last November, prevents toys from being included in children’s meals that exceed 600 calories and lack fruit or vegetables.

Mar said today that the legislation has brought about “a major sea change in the fast food industry in the whole United States, and bolstered other local efforts” to battle childhood obesity.

He said McDonald’s and several other fast food chains have started creating healthier kids’ meals on a national level since the legislation was passed, including serving apple dippers and no longer serving soda as a default drink, instead offering options including milk and juice.

Mar said the new version of McDonald’s Happy Meal “still doesn’t meet the basic nutritional standards (set by the city), but we think that the healthier meal that they’re offering is a big step forward, and don’t think it would be implemented so quickly” without the legislation.

Mar said he met recently with Scott Rodrick, who owns 10 McDonald’s restaurants around the city.

Rodrick told him that the restaurants will still be giving out the toys along with meals, but will now require a 10-cent donation that will go toward the company’s Ronald McDonald House charity, a move Mar said he didn’t mind.

“The toy was never the big issue, it was the offering of healthier options,” he said. “I think 10 cents that goes to a charity is a positive thing.”

He added that fast food chains selling kids’ meals “still have a long way to go and we’ll continue to push them on a local level.”

Starting Thursday, the San Francisco Department of Public Health will be going to various restaurants around the city to make sure they are complying with the new law, Mar said.

If a company doesn’t want to comply, the city can suspend its health permit.

“That’s the last, most drastic step to force compliance,” he said. “But we really want to promote voluntary compliance from restaurants, and want as many local businesses to step forward and work with us.”