Entrepreneur Takes Over On Neighborhood Schools From “Ragtag Group of Parents” 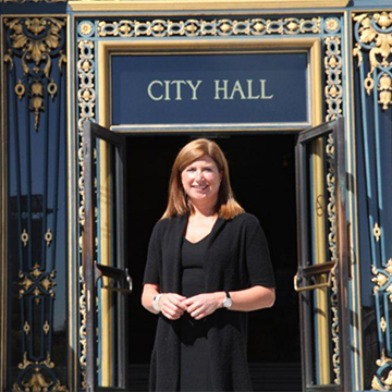 Neighborhood schools are a pet issue for mayoral candidate Joanna Rees — so much so that the venture capitalist (and admitted longshot to upset Mayor Ed Lee next week) has added a second campaign to her fall schedule: Rees is both chief advocate and primary bankroller for Proposition H, a nonbinding policy statement urging San Francisco Unified School District to adopt a neighborhood-first approach when assigning schools.

Supporting Proposition H means defying the formidable teachers’ union, which has come out strongly against the measure (and who would not likely forget such an affront on the statewide level).

Not one to shy away from challenging the status quo, Rees formed her own campaign committee to support Proposition H and plunked down $125,000 of her own money, records show, and this week challenged the head of the San Francisco teacher’s union, United Educators of San Francisco, to publicly debate the issue.

“I met 1,000 parents today, and if I had taken a poll, I bet 950 of them would say they weren’t able to send their kids to their neighborhood school,” said Rees, who recounted a block in Bernal Heights where 20 parents sent students to 20 different schools.

But it was meeting a seven-year old girl from the Bayview, making an hour-long commute to school in the Marina on Muni by herself, that “pushed [Rees] over the brink on this issue,” she said. “I’ve been harping on neighborhood schools for a long time, and I said it was time to put my money where my mouth was.”

Other than Rees, the effort is bankrolled by non-San Franciscans. The next most-generous donor is a Dana Point real estate developer called MPDSE, Inc, which contributed $2,000. Plunking down $1,000 each were Charles Smith of San Diego (retired), Bernard Sucher of New York (an investor), Harry E Rhoads of Fairfax, VA (Washington Speakers Bureau) and Thomas P Newtown of Atherton (a broker with ICD).

While it was a “ragtag group of parents” that collected the signatures to put Prop H on the ballot, in the words of Bayview activist Omar Khalif, who helped lead that charge, it is Rees who is doing the campaigning — in part because the original campaign, Families for Neighborhood Schools, is dead broke: the committee, which submitted the requisite 7,400 signatures to put the policy initiative on the ballot, is about $17,000 in debt, mostly to campaign lawyers, according to records.

“We were scraping nickels and pennies together just to get this on the ballot,” Khalif said.

With the bank broken, Khalif and fellow proponents Tami Gin and Carol Endo haven’t done much campaigning beyond brandishing signs and displaying support via social media, Khalif said Tuesday. Rees’s money, by contrast, has funded a pair of television commercials produced by a Nashville, TN firm.

Under the school district’s current assignment system, parents select a list of seven preferred schools. If a school has more applicants than spaces available, officials look at a series of criteria called tiebreakers to decide which student should receive higher preference. Only elementary schools have a tiebreaker that looks at a child’s home in relation to its distance from schools, and it is the fourth most influential tiebreaker on the list.

A third group supporting Proposition H, headed by a Richmond District Republican named Chris Miller, was out of money in mid-September, making Rees’s the only game in town.

Opposing Proposition H has been organized labor as well as the city’s elected family, a peek at the measure’s supporters reveals.

“Everyone’s playing politics,” Khalif said, “I’m like, Tim Paulson [executive director of the Labor Council], why are you even on my phone?” More to the point, Paulson and other proponents in labor will probably not be on Rees’s phone anytime soon.

Political observers will ask why Rees is exposing herself, especially if the formidable campaigner — who claims to have knocked on 300,000 San Francisco doors this cycle — aspires to remain in politics past last week.

“I was warned about the kiss of death,” says Rees, but if parents with young children hang on in the city, she could have a pre-made base for a possible run for Assembly or whatever she has her sights on.