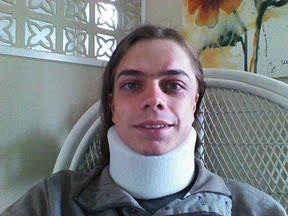 A former U.S. Marine injured in Occupy Oakland demonstrations last month released his first public statement on Sunday after he was released from the hospital last week.

Olsen posted the statement on Google Plus Sunday morning, accompanied by a picture of himself with a neck brace and a scar on his forehead.

“I’m feeling a lot better, with a long road in front of me. After my freedom of speech was quite literally taken from me, my speech is coming back but I’ve got a lot of work to do with rehab,” Olsen, 24, said in the brief statement.

On Wednesday, Olsen’s friend Adele Carpenter posted a statement to the Veterans for Peace website that said that Olsen was left unable to speak as a result of the head injury he suffered during demonstrations in Oakland on Oct. 25.

Carpenter said she met Olsen through her work with the Citizen-Soldier Alliance over the summer. Olsen served two tours in Iraq but left the military in 2010.

After moving to the Bay Area earlier this year, he became active in the anti-war groups Veterans for Peace and Iraq Veterans Against the War, and more recently had been participating in the Occupy SF and Occupy Oakland protests.

Iraq Veterans Against the War issued a statement on Oct. 26 that said that Olsen had suffered a fractured skull after being hit with a police projectile during demonstrations the night before in Oakland. Those demonstrations were sparked after an early-morning raid cleared the Occupy Oakland camp that had been occupying Frank Ogawa Plaza since Oct. 10.

Protesters returned to the plaza that evening, but police barricaded the plaza and kept protesters at bay with tear gas, smoke grenades, and rubber bullets.

Oakland police have said the incident that injured Olsen is under investigation, but have revealed few details about the case, including which of the over a dozen law enforcement agencies may have fired the projectile that injured Olsen.

Carpenter’s statement said that Olsen is looking to live in the South Bay as he undergoes outpatient treatment, and that he may move to Berkeley after he completes his rehabilitation. Carpenter also said that Olsen is considering legal action.