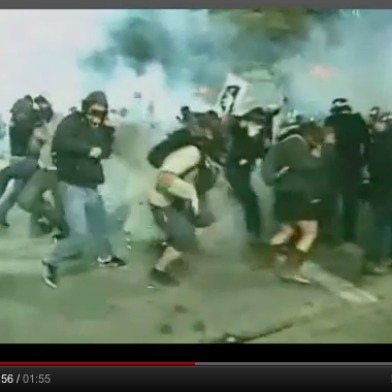 Occupy Oakland protesters are again pitching tents in the plaza in front of Oakland City Hall but Mayor Jean Quan and police Chief Howard Jordan said today that they don’t have any plans to remove the tents or the protesters at this time.

Although hundreds of officers from the Oakland Police Department and other agencies went to great trouble to remove protesters and their tents from Frank Ogawa Plaza Tuesday morning, Jordan said police only have “a minimal presence” at the plaza now and “there are no plans for police action unless there are calls for service.”

Rallies at the plaza the last two nights have been peaceful, with no arrests and no violence, he said.

Joining Jordan at a news conference at City Hall, Quan said, “We don’t want them to camp downtown” but she doesn’t want to crack down on protesters at this time “if closing the camp would create more violence.”

Quan added, “It’s a complex situation” and “we have to make an assessment day to day.”

She said she’s more concerned about potential health and safety issues at the plaza than she is about the tents.

Although health and safety issues prompted police to clear the plaza Tuesday morning, Quan said such concerns “haven’t started yet” following the protesters’ return to the plaza.

The violence Quan referred to occurred Tuesday night, when a confrontation between protesters and police led to injuries on both sides.

“There may have been mistakes made, probably on both sides,” Quan said.

“Some are back at work, some are not,” he said.

The protester who was hurt the most was Iraq War veteran Scott Olsen, a 24-year-old Daly City man, whom his friends said was critically injured when he was hit in the head with a projectile fired by police.

Olsen is being treated at Highland Hospital in Oakland, where he was listed in fair condition.

Quan and Jordan said they have both visited him at the hospital and apologized that he was injured.

Quan said a full review of all the police tactics that were employed Tuesday night is under way and the results will be announced next week.

Quan attempted to address protesters in the plaza Thursday night but they didn’t allow her to speak.

The mayor said she still wants to talk to protesters and “ask that we enter into a dialogue.”

Quan said she also would like the protesters to talk with merchants in downtown Oakland who are concerned that the demonstrations, which began on Oct. 10, are hurting their businesses.

She said people “are afraid to come downtown” to shop and some businesses are not renewing their leases.

Quan has had a difficult week because some people have criticized the way she has handled the Occupy Oakland protests and a group launched a petition to have her recalled from office.

But Quan said she has no plans to resign, saying, “I always said this is a tough job” and “I have a job to do.”