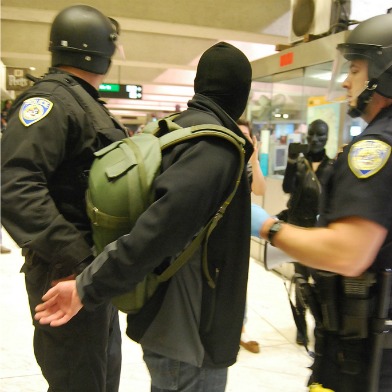 As previously reported, protesters are at it again tonight, saying at a press conference Monday that they’ll be demonstrating outside the Powell BART Station fare gates during tonight’s commute.

The protest organizers, No Justice, No BART, say they have no affiliation with Anonymous, who staged a sparsely populated demonstration this past Monday.

Formed in 2009 after the New Years’ fatal shooting of Oscar Grant at the Fruitvale BART station by BART police officer Johannes Mehserle, the group says it will continue protesting until “they can get guns taken away from BART police, or..get the BART police department disbanded all together,” reports ABC7.

You can hear an interview with one of the group’s organizers here on IndyBay, and read their “strictly financial” arguments against BART police here.

On their site, No Justice, No BART says that at tonight’s demonstration, they hope to force BART into opening the Powell station fare gates to allow passengers to board for free, saying:

Our groups intend to ‘protest’ outside of the fare gates, inside the Powell BART station (you will not need a ticket to join us). We have made this strategy public and announced the action well ahead of time, to preempt some of the disingenuous media furor around “inconvenienced” passengers and to create a “Catch-22” for BART.

Since BART has been very clear in insisting that we should “protest outside the fare gates”, they will have a choice. If we mobilize enough people, in order to keep riders moving into and out of the station, they will have to open the emergency exits and let folks ride for free, just as they do for all sorts of big sporting events, antiwar protests, and even past No Justice No BART protests.

BART officials appear consistent on the “right side of the fare gates” issue: BART spokesperson Jim Allison indicated to the SFBG Wednesday that if the demonstration remained outside the fare gates, everything’s cool.

“We don’t have a problem with people protesting outside the fare gates, as long as it doesn’t disrupt service and is done lawfully,” he told the Guardian. “We’re not going to arrest them for just showing up and expressing their opinions. We’re not going to try to silence them.”

But No Justice, No BART is prepared for any eventuality, and says that if the transit agency responds by closing the station “we are prepared to respond by moving the protest to other stations and/or inside the fare gates.”

Tonight’s civil action is scheduled to begin at 5 PM.