There will be heavy traffic in the area. Motorists are advised to allow extra travel time.

The following Muni routes will be affected from 8 p.m., Friday through the end of service Sunday: 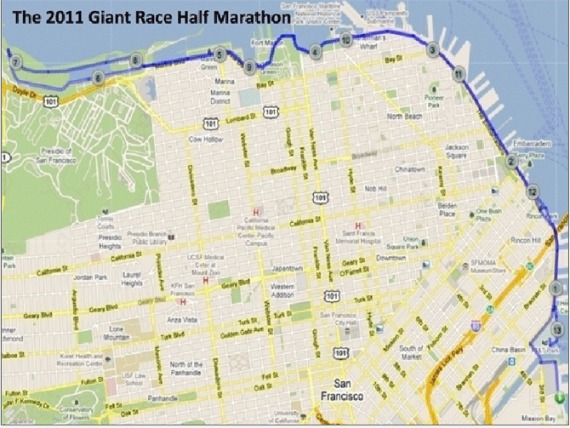 The race will start south of AT&T Park, continue north on The Embarcadero, west along Fisherman’s Wharf, through Fort Mason and the Presidio, returning along the same route to conclude inside AT&T Park. A route map of the race is above.

From 11 p.m., Friday to 1 p.m., Saturday:
Terry A. Francois Street between South and 3rd streets

From 7:45 to 10 a.m., Saturday
Northbound 3rd Street between Mission Rock and King streets

From 7:45 to 11 a.m., Saturday
Northbound King Street between 2nd and 3rd streets

From 7:45 to 11 a.m., Saturday
Northbound Embarcadero between 2nd and Jefferson streets

From 7:45 to 11 a.m., Saturday
Jefferson Street between The Embarcadero and Aquatic Park

The following Muni routes and lines will be affected:

Post Street between Webster and Laguna streets will be closed from 5 a.m., Saturday to 11 p.m., Sunday.

There will be no impact on Muni service.

49ers Football Game
The San Francisco 49ers will host their second home pre-season game on Saturday against the Houston Texans starting at 5 p.m. at Candlestick Park.

On Saturday, Muni customers may purchase their fare in advance. SFMTA staff will sell Muni fares from 2:30 p.m. to 5:30 p.m. at the following locations: