On the Road: Fleet Foxes, The Walkmen, Bon Iver and Others

The outdoor Greek Theater adorns its most viable season, Indian summer (the arrival of which is the annual hope, at least), with offerings from a handful of rather wintry bands willing to take on the challenge of performing under open sky. With every flaccid harmony, each lame chord sure to dissipate into the night air, such a venue makes for a challenge indeed, and one to which I have seen more than a few bands (cough, The Shins) succumb. And yet, I think the following are good bets.

The younger and, in my opinion, less exciting band is headlining here – something of a shame, but no surprise. Fleet Foxes produce gorgeous folk music driven by warm, healthy vocals, wreathed generously in intricate harmonies (“White Winter Hymnal”, “Battery Kinzie”). They offer an aesthetic experience of simple, silken digestibility. It is unbeatable comfort music, as welcome as – forgive the image, I can’t help myself – a warm flannel on a winter day. Clear, audible lyrics summon generally rural imagery; the more complex anxieties attendant upon city life are left behind in favor of a timeless variety of emotional considerations. 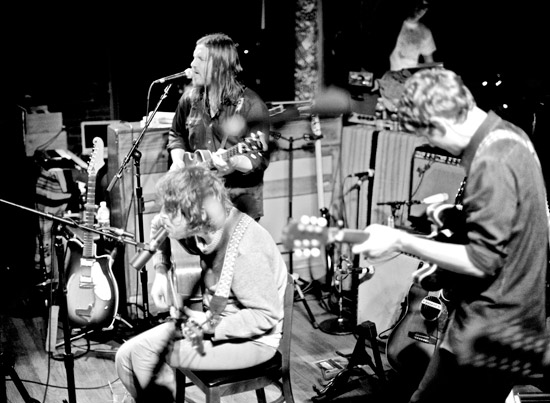 For all these reasons, it is no wonder that their albums have been made available for sale at Starbucks (I mention this not to be derisive but merely to provide a measure of their mass appeal. Starbucks sells plenty of good music, including the still more talented Bon Iver). But in the end, Fleet Foxes are too innocuous for my taste. Mount every sentiment onto a bed of pretty male harmonies, and you risk estheticizing every last emotion out.

The Walkmen provide a hearty antidote to this. Compared to the painstaking perfectionism obviously apparent in Fleet Foxes’ recordings, The Walkmen’s playing is hilariously facile, natural, even loose. It sounds almost as if the band were composing the songs on the spot, taking one another’s cues by employing the amazing mind-reading ability that longtime band mates eventually acquire. In evidence of this slightly fantastic depiction, the band recorded close to thirty songs for their most recent album, Lisbon; the eleven selected they churned out in five days.

An irresistible personableness comes through Hamilton Leithauser’s stubbly, easily impassioned vocals. He remains eternally the woe-is-me bar-stool troubadour, effortlessly articulating the frustration, fury, helplessness he endures (almost always) at the hands of women – or rather the world at large, personified therein. The band, wielding vintage rock instrumentation, is his external organ, loyally carrying his trains of emotional thought through a series of realizations (usually in the form of explosive choruses) to their eventual, unrushed conclusions. A strong rendition of “The Rat” or “Stranded” threatens to mute the show’s headliner altogether.

Bon Iver’s recent self-titled sophomore is a triumph – a breaking through of the hermetic boundaries that folk music tends to erect, within which predecessor For Emma, Forever Ago mostly remained. While the weight of this debut rested squarely in the phenomenon that is Justin Vernon’s vocals, Bon Iver supports Vernon’s special talent with a broader sound palette, incorporating more prominently electric guitar, distortion, electronics and horns. This is no longer one man and his acoustic guitar, recording alone in a cabin in the woods of Wisconsin (well, the last part is still sort of true). 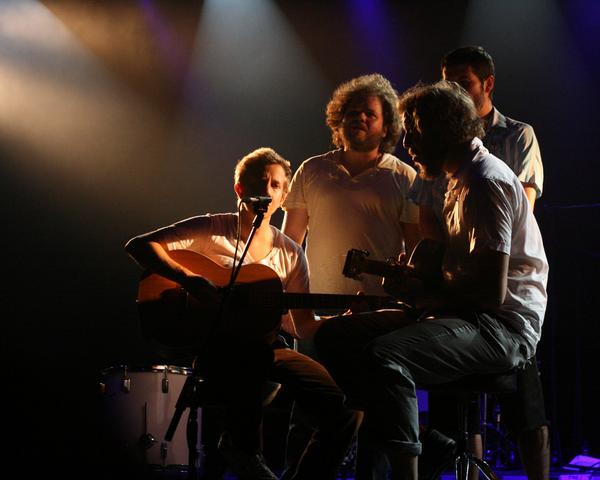 The album’s most pronounced musical expansion occurs in the second half, where, not coincidentally, its best songs await. The teasingly brief “Hinnom, TX” (each song relates to a particular locale) introduces a minimal panorama of sounds – reverberating piano, strings, electronics, a host of strange, scurrying background noises – before which Vernon’s baritone and tenor intertwine in counterpoint.

It is telling of my tastes that I can’t help imagining a disco remix of this track (someone needs to make this happen). Hypnotic breakout “Calgary” lays multiplied vocals over weightless keyboard, propelling itself thus until guitars arrive to rein the sensual song into its conclusion. Beth/Rest, a truly surprising finale, goes so far in its mobilization of synth, sax, and heavy, slow-tempo percussion as to evoke a (toned down) early-solo career Phil Collins.

In the wake of For Emma, Forever Ago, Vernon expressed anxiety over his potency as a live performer: “”I don’t want to be the guy with an acoustic guitar singing songs, because that’s boring for the most part. The song actually needs 80-500 people singing or whatever the vibe is of that room, it needs that fight,” he told Pitchfork.

Not only does the new album mobilize heavier artillery, but it offers considerably more to fight for (not that I heard any complaints from attendees of his earlier performances). I would expect nothing short of a stellar show.

Handsome Furs (9/3 at Slim’s · tickets) – This Canadian duo, consisting of Wolf Parade ex-pat Dan Boeckner and wife Alexei Perry, whose praises I have already sung, should put on an invigorating show.