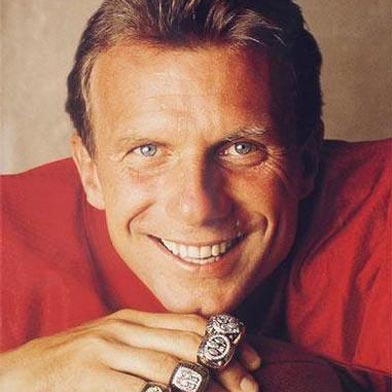 Montana said that anyone interested in participating can donate a meal simply by “liking” Kraft Fight Hunger on Facebook. He said he became involved in the program last year, and it helped raise 20 million meals for impoverished people worldwide.

“It was a lot of fun,” Montana said, and joked that he wasn’t sure if he would be invited back this year.

“Teams always change, as they say,” Montana said. “I’m happy to be a part of it.”

This year Kraft has raised their goal to providing 25 million meals, and while their program reaches to almost every continent, Montana stressed that it also helps many people in San Francisco and the United States.

“One out of six Americans don’t know where their next meal is coming from,” Montana said.

He praised the work of the San Francisco Food Bank, which he said gives nearly 45 million pounds of food every year. It sends out thousands of pounds of food daily to hungry families in San Francisco and Marin Counties, donated from more than 500 farmers, manufacturers, grocers and individuals.

“They’ve got a great program,” Montana said. “The more food we can get out, the better.”

Montana signed autographs and took photos with food bank volunteers and employees, many of whom arrived in Joe Montana 49ers jerseys.

Montana also campaigned for the upcoming Hunger Action Month in September, and encouraged anyone interested to help by getting involved with the charity group Feeding America.

The Huddle to Fight Hunger campaign will go on through the football season, culminating in the second annual Kraft Fight Hunger Bowl at AT&T Park on New Year’s Eve. The event will feature a football game between Army and a representative from the PAC-12.