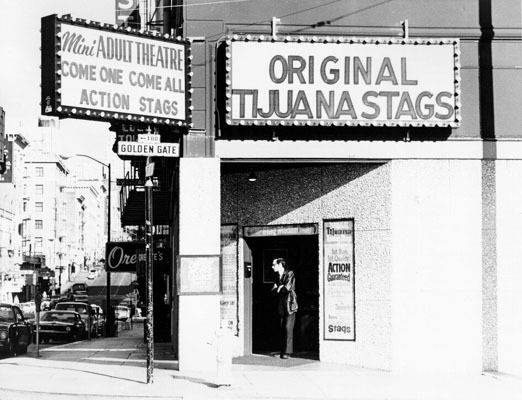 You know it when you see it. And beginning in the 70s, you could see it everywhere in San Francisco. By 1970, SF became the first US city to allow hardcore pornography to be shown in theaters.

Now through August 25, our own Yerba Buena Center for the Arts will host a series named after Stabile’s film and centered on SF’s golden age of pornography.

Kicking off with Stabile’s Smut Capital short tonight at 7:30 pm in the screening room, as well as a discussion with Stabile and Shepard to follow, the series boasts an array of narrative features, shorts and documentaries.

The third film screening in the series is Arthur Bressan Jr.’s Passing Strangers from 1974 (Thursday, July 28 at 7:30pm). A seminal filmmaker — in both senses of the word — of queer cinema, Bressan blurs the line between erotica and arthouse in this surreal and lyrical smut flick. Two men named Robert meet through the personals section of the Bay Area Reporter. In his ad, one of the Roberts copies Walt Whitman’s “To a Stranger,” where the film gets its title and the two men soon share more than their love of literature.

In the film’s central sex scene, where the Roberts sound their barbaric yawps in the woods, Bressan scores a passionate session of butt sex with Erik Satie’s “Trois Gymnopedies No. 1.” This track is typically used for funerals or more elegiac situations yet it works curiously well in concert with this particular little death.

There’s something strangely arty about Passing Strangers: a scene where the younger Robert imagines himself as a tragic clown and masturbates in slow-mo to an ecstatic audience is kind of… Fellini-esque. Bressan’s haphazard use of montage and jump cuts — a bummer for formalist porn-goers but a boner for cinephiles — elevates Strangers above the status of mere jack-off material. This is how you do sex in 16mm right. The film’s sublime treatment of gay eros amid the hustler crowd of Polk Street offers more provocative and honest gay representation than most contemporary queer films I can recall. For a slice-of-life window into the life and times of a roaring counterculture, look no further.

Passing Strangers is not the only film in the series with “lit’rary” inclinations. The Mitchell Brothers’ Resurrection of Eve (1973) — the last film shown in the series — opens with a William Blake quote as prelude to the much less enlightened material that follows. In an unsavory opening scene, Eve begins with a 12-year-old girl (played by an adult, thankfully) being forced to blow a toothless hick. The frank creepiness of this moment suggests something out of John Waters or, maybe later, Todd Solondz (re: 1998’s Happiness… or don’t).

The discomfort and clumsiness of the film’s sex scenes — with an emphasis on natural light and extreme close-ups rather than full-body shots — suggest something more complex than a pandering to perverts. A few Bergman-esque shots of women looking pensive on the beach make this film an especially un-erotic experience. Clearly there’s some psychological penetration at play here, rather than just that other kind.

These films will all be shown in their original rather than digital format. YBCA curator Shepard says some of these films are “impossible to see” and that few historians and curators have really tried to assemble this material “to put it all together and make sense of it.”

Shepard also added that “the novelty of San Francisco being this wide-open place for this material became less of a novelty because [pornography] really spread across the country.” This is where it all got started.

That said, consider this series an arthouse exhibit, an embrace of a golden age in San Francisco. Bring a date — but maybe not a first date.