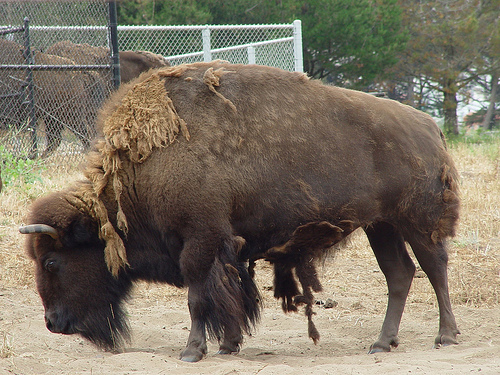 Tuesday was a sad day for the bison community in San Francisco’s Golden Gate Park as an aging bison was euthanized exactly two weeks after a fellow bison was put down, leaving three female bison to roam, a San Francisco Zoo spokeswoman said.

Pretty Old Cow, a 28-year-old female bison, was sick for the past few months. She was voluntarily separating from the rest of the herd, lying down and showing no interest in eating or drinking. She was very stiff. Eventually, she just didn’t get up, San Francisco Zoo spokeswoman Lora LaMarca said.

This behavior was similar to that exhibited by 20-year-old bison Tenny, who was put down on July 5, LaMarca said.

The Zoo oversees the health and welfare of the bison, which live on the paddock maintained by the San Francisco Department of Recreation and Parks. The paddock runs along John F. Kennedy Drive between 36th Avenue and Chain of Lakes Drive East.

There had been a herd of five female bison, descendants of bison given to then-San Francisco Mayor Dianne Feinstein by her husband, Richard Blum, in 1984. Now three bison remain.

“The others appear to be okay,” LaMarca said. “Someone checks on them every day.”
The three bison range from 20 to 28 years old. Bison in captivity tend to live longer than they do in the wild, LaMarca said.

With the dwindling numbers of bison in the spacious meadow, there are plans, LaMarca said, with Rec and Parks to bring in new, younger bison.