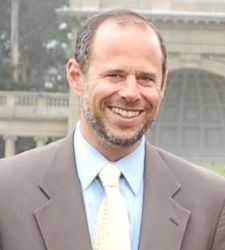 Reiskin has no transit experience, but has worked for more than 20 years in the private, academic, nonprofit and public sectors. He was named as the new head of the SFMTA at a news conference held by the agency this morning.

His contract goes before the Board of Supervisors on Aug. 2, and Reiskin is expected to take on his new role on Aug. 15, replacing Debra Johnson, who took over as interim chief on July 1 after Nathaniel Ford stepped down.

Reiskin was appointed as public works director by then-Mayor Gavin Newsom in 2008. In that role, he has managed an annual $165 million operating budget and overseen more than 1,100 employees.

When he takes over as the SFMTA’s executive director, Reiskin will be responsible for an operating budget of more than $775 million and about five times as many employees.

As an active cyclist and daily Muni rider, Reiskin said he has been personally invested in the agency for some time.

Board of Supervisors President David Chiu described Reiskin as a man who “rides the ride and walks the walk.”

One of Reiskin’s first tasks will be resolving the contract dispute with Muni operators. He said he looks forward to engaging in a “constructive partnership” with the operators and putting transportation first.

Safety is also likely to be a top priority, as the agency has come under fire for several light rail crashes in recent years and crime on its vehicles.

Reiskin said he would work with police Chief Greg Suhr to address the outcry in the city’s Bayview District over a recent officer-involved shooting by San Francisco police that occurred while officers were conducing fare enforcement.

At a community meeting at the Bayview Opera House on Wednesday night, some complained that the Bayview is targeted disproportionately in fare enforcement operations.

Reiskin said people should not feel harassed when riding Muni.

His experience includes serving as assistant to the city manager in Oakland, where he coordinated work involving various city agencies, focusing on public safety and community development.

“The future of transportation is bright,” said Tom Nolan, chairman of the SFMTA board of directors.

10:23 AM: At a press conference this morning, the SFMTA confirmed what pretty much every other news outlet in town’s already reported — that San Francisco’s public works director Ed Reiskin has been named executive director of the San Francisco Municipal Transportation Agency.

Reiskin will be taking over the duties presently handled by interim director Debra Johnson on August 15, only six weeks after previous head Nathaniel Ford resigned.

According to his bio on the DPW site, “Reiskin has more than 20 years of experience in the private, academic, nonprofit, and public sectors. Before joining DPW, Mr. Reiskin served as the first Director of the City and County’s new 311 Customer Service Center. Prior to joining the City and County of San Francisco, he served as the Interim City Administrator and as Deputy Mayor for the Government of the District of Columbia.”