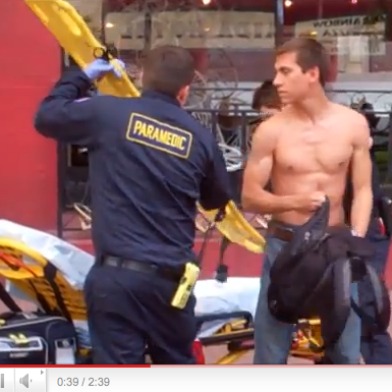 Just a few blocks from the Civic Center SF Pride celebration, the festive atmosphere of Market Street Pink Saturday night was punctured with the sound of gunfire. When the dust settled, five people (including a 76-year old San Francisco resident) had been injured and, for the second year in a row, San Francisco’s iconic LGBTQ celebration was violence-scarred by association.

Two suspects,18-year old Terrell Blay and a 16-year old whose identity police are withholding since he’s a minor, were arrested shortly after the shooting. Like the fatal shooting that marred last year’s Pink Saturday celebration in the Castro, neither the shooters nor their intended victims apparently had any connection to Pride; in both cases, the attacks reportedly stemmed from conflicts between San Francisco-based gangs. Prosecutors are expected to announce what charges the suspects will face today.

Like virtually everything else that happens in these times, a portion of the event was captured on video. David Wilton recorded the shooting’s grisly aftermath and posted it on YouTube. Wilton titled the video San Francisco / Civic Center Shooting at Pride 2011 – Sat 6-25-2011, “based on the direction of the people coming and going in the area, the way these people were dressed and the close proximity of the incident to the parade route and the festival,” Wilton said.

Shortly after posting the video, Wilton was bluoz reports, contacted by Brooke Oliver, SF Pride’s General Counsel, who said the videographer “simply chose to sensationalize your posting by wrongly associating a violent tragedy with the safe and peaceful, SF Pride.”

1. Take down the above referenced video.

2. Replace it with an affirmative public apology to SF Pride for wrongly associating it with violence, and clarifying that the shooting on Market Street had nothing to do with the SF Pride festival, and was blocks away from it;

3. Pay SF Pride $10,000 in damages and costs. Any delay will certainly see this amount increase.

Wilton, a lawyer himself, says “I am very sorry if Ms. Oliver and SF Pride misinterpreted the captions…the public deserves to see what’s on the video and happening in their city close to events like the Pride festival.”

Instead, Wilton retitled the video with no mention of SF Pride and put in the YouTube description an explanation of everything that had happened up to that point, posting Oliver’s letter in its entirety. Embedding was also disabled on the new, reposted video.

That SF Pride is being especially proactive in the way the organization is working to distance itself from the shooting is no surprise. After last year’s Castro shooting left one dead and two others injured, the event’s organizers, The Sisters of Perpetual Indulgence, clamped down on the event’s historic booziness in an effort to stem the tide of, as Eureka Valley/Castro Neighborhood Association President Alan Beach-Nelson puts it, “[the event becoming] less gay and more looky-loos.” He added that, “it’s the looky-loos [who are] looking for trouble.”

This is the third shooting in the mid-Market area in under a month. While police insist there is no direct connection between the incidents, continued reports of violence cannot be welcome news for Twitter and the slew of other firms recently enticed to move into the area with a bevy of tax breaks. A new police sub-station is scheduled to open a few short steps off Market, on 6th Street, however a significant number of officers won’t be based there–instead it will serve as a check-in point so that officers won’t have to travel all the way back to the Central Station to make reports.

Another possible reason for SF Pride’s response to Wilton’s video: money. A city audit last year revealed the historic organization’s finances to be in shambles, which might be why Oliver says that the verbiage Wilton used in his video “harms SF Pride’s ability to attract attendees and sponsors for future events by creating the false impression that the event and festival were the site of a violent shooting.”

Since the audit, SF Pride went though an internal shake-up that saw its full-time staff cut in half. The non-profit has since reduced its debt load from $225,000 to $138,000 while managing not to scale back the festivities from previous years.