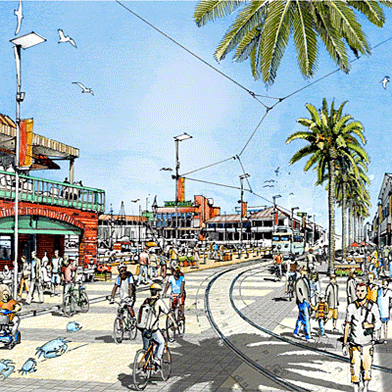 City officials are working to transform part of San Francisco’s Fisherman’s Wharf from a tsotchke-filled traffic jam to a vibrant outdoor destination for locals and tourists alike in time for the America’s Cup sailing race.

The redesign is part of a national movement to reclaim and beautify urban waterfronts for public use, an urban designer with the city’s Planning Department said today at a presentation hosted by the San Francisco Planning and Urban Research Association.

The environmental review for a revamping of Jefferson Street is currently undergoing a 30-day public comment period, and–barring any lawsuits or major changes–will likely go before the Board of Supervisors this month, urban designer Neil Hrushowy said.

“Fisherman’s Wharf is a beautiful and historic location,” Hrushowy said. “But it needs to be refurbished. There’s no doubt.”

Only about 20 percent of the area’s visitors each year are locals, according to studies commissioned by the city.

The waterfront was an industrial zone and rail yard as late as World War II, when it was used as an ammunition grounds for the Pacific theatre, Hrushowy said.

It is now home to some of the last West Coast commercial fishing fleets on the West Coast with family businesses that have been there for four generations, he said.

City and business representatives said they hope that limiting vehicular access and creating public seating would let visitors connect with the wharf’s history and character.

“(The plan) would let people stop and see the fishing boats so they could view the reason the wharf is there,” said Kevin Carroll, executive director of the Fisherman’s Wharf Community Benefit District.

Officials are also confident that some retail opportunities would inevitably become more upscale, and most of the businesses in the area are on board with the concept, Carroll added.

The plan is still in the conceptual stages and does not include specifics, but Hrushowy said it is inspired in part by cities such as Vancouver and Toronto that have used public-private partnerships to create unbroken stretches of public waterfront space.

In those cities, destinations such as parks and public art projects are connected by high-quality, well-maintained promenades, Hrushowy said.

He said the America’s Cup race would provide an opportunity for the city to focus on its own waterfront, and although the Jefferson Street project is not directly related to the race, the Planning Department is hoping to finish it by the 2013 event.

If the environmental review is approved, officials could start the design, contract and building process in June, Hrushowy said. A price tag would be attached to the project during those stages.

Hrushowy and Carroll said that originally, many Fisherman’s Wharf business owners were wary of making Jefferson Street a bike- and pedestrian-heavy area. They gradually came to accept, though, that most of their customers are the 75,000 pedestrians who pass through the area on any given day.

The few thousand drivers near Fisherman’s Wharf are generally just looking for parking, according to the city’s studies.

Plus Jefferson Street has already become an unofficial bike and pedestrian thoroughfare, Hrushowy said, with most drivers recognizing that they need to yield to other forms of transportation.

He acknowledged that San Francisco projects always run the risk of litigation but said he thought any opposition could be worked through.

The public can review the proposal at www.sf-planning.org. A complete list of plans and projects is available under the “Plans and Programs” tab.