SF Bands You Should Know: Weekend 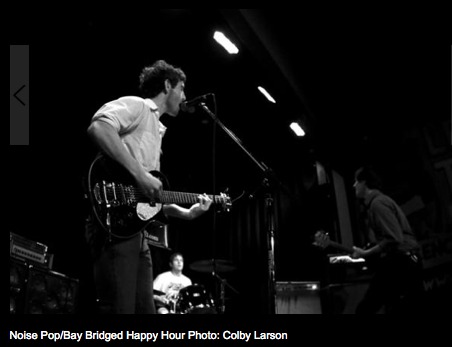 In an age where the next big, change-the-world-for-15-minutes band is only a mouse click away, there’s something refreshing about Weekend’s willful obscurity. Google the band’s name and you’re more likely to find the score of last Sunday’s football game than info about the San Francisco post-punk trio–adding Sports, the name of their breakthrough debut album, into the mix will only make things worse.

Their record covers are mysterious and abstract, with pictures of the band nowhere to be found. “We didn’t want a name that said too much about the band, something where you hear it and get a very specific connotation. We wanted to keep it vague in that it wouldn’t give you an idea of what the band actually sounded like. Also it wouldn’t be something you could find easily on the internet,” says guitarist Kevin Johnson.

“We all grew up in the punk and hardcore scenes where listening to music was a very intentional experience–you went to the record store and sought out new music very actively. These days with blog and internet culture, fans just come to us. We wanted our music something that people sought out and connected to.”

This attitude is less a promotional gimmick, a usage of Naomi Klein’s No Logo as a marketing text, than it is a honest effort to strip away as much of the superfluous nonsense from making music in the 21th century as possible. While it’s a punk rock move, it’s one rooted in the genre’s self-contained idealism rather then its bratty insouciance.

“It’s not wanting to be obscure for the sake of being obscure,” adds drummer Abe Pedroza, “it’s wanting to focus on the art and not the culture that surrounds it.”

None of this would matter if the music didn’t hold up when removed from its immediate context, but happily it more than stands on its own. Weekend deftly combines the angular late ’70s post-punk of British bands like Joy Division, Wire and Section 25 with the fuzzed-out shoegaze of My Bloody Valentine and The Jesus and Mary Chain.

The result is something unexpectedly revolutionary–icy, biting guitars surrounded by warm blankets of distortion, catchy vocal melodies drowning in swirling oceans of reverb and all of which are constantly pushed forward by Pedroza’s relentlessly driving backbeat. This is music that’s instantly engaging and utterly addictive. It’s easy to see how they’ve been successful by making fans focus on what matters–the music.

Weekend has been on a meteoric upward trajectory since the its inception two short years ago. Johnson and singer/bassist Shaun Durkan have known each other since middle school in Novato and, even though they’d had the idea in the back of minds to start a band together almost since that very moment, they were only recently able to make it a reality.

Johnson and Durkan had been talking about forming Weekend for so long, that when they finally went into SoMa’s Function 8 studio to record Sports, “it was an eight-month cathartic release of material,” says Johnson. “It wasn’t very difficult and didn’t take much thinking or talking–it was very organic.”

The release of Sports last year met nearly universal critical acclaim, and the subsequent national tour that coincided with that release is what took the band from local buzzband to bona-finde indie rock rising stars. Last March, before their album dropped, Weekend made the pilgrimage to Austin, TX for the annual South By Southwest music festival. They played shows at house parties thrown by their friends and, by all accounts, had a blast.

This year, after Sports, they experienced the festival as a buzzband just on the cusp of breaking though–literally the ideal spot for a young band going into the festival. They were constantly playing official showcases and unofficial parties at venues all over Austin. In one short year, they went from South by Southwest’s outskirts to being at its very heart.

Like the best shoegaze artists, My Bloody Valentine being a prime example, Weekend’s songs can vary widely in mood simply based on volume. Soft, the songs are moody and introspective. Loud, they’re full-throated rockers aiming to splatter a listener’s brains across the back of their skull. When the band plays live, their songs fall squarely in the latter camp.

“Someone from [music nerd hive-mind/indie rock tastemaking website] Pitchfork wrote that, live, our volume goes from loud to louder,” says Pedroza with a laugh.

Turning up to 11 at their live shows paradoxically allows the band to make music that’s simultaneously brutally aggressive and introspectively soothing. The extreme volume becomes a physical experience and listening becomes an act of meditation.

“Sometimes, when you hear a really loud band, it’ll get to the point where it’s a contemplative experience,” says Johnson. “It forces you into your head; it spaces you out…People have told me they’ve gotten really zoned out by the volume. At first it’s like ‘ow, this sucks,’ but then you submit to it and it’s beautiful.”

Next for the band is the release of a EP that will show Weekend in its most raw and elemental state. Written and recorded in a caffeine-fueled, eight-hour overnight session with engineer Matt Koshaks, the two song EP is a document of the band at its most creatively uncensored and is scheduled for a May or June release.

Weekend’s next Bay Area show will be May 19th at the Independent. After that show, they’re looking to hunker down and develop some new material for another EP, this one written more traditionally, to be released on venerable indie label Slumberland Records near the end of this summer.

“I feel like the music we’re developing post-Sports is expanding,” Johnson says. “Not that it’s getting less concise, but the conceptual seeds we planted in that record are really starting to grow…When we were writing those songs we had no idea where they’d end up or if anyone would hear them. Now that people have heard it, we have this whole pedestal off which we can jump and fuck with people.”