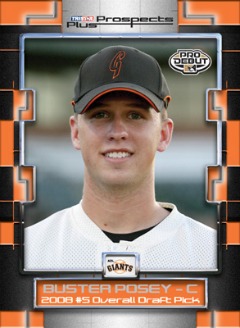 4/20 8:45 AM: Banking and baseball usually don’t go to together, unless you happen to have the munchies and buy a few thousand Cha-Cha Bowls at the Giants game. But Thursday, Bank of America is using SF Giants starting catcher Buster Posey to lure you into their SF branches.

B of A tells us via press release that Thursday, April 21 Posey will hit select SF B of A locations (they won’t tell us which ones) to pay off your mortgage and student loans!

JUST KIDDING! He’s just going to “give away tickets to upcoming Giants games along with other baseball-themed items,” says the release from B of A’s PR agency.

If you decide to stake out your local Bank of America in case he stops by, just remember, don’t talk to a teller, as it can cost you.

What: Bank of America’s Customer Appreciation & Partnership with MLB
When: Thursday, April 21st from 10am-12pm
Where: Select Bank of America locations