“Coppélia” is the comic tale of a girl and boy whose matrimonial path takes a slight detour after the sudden appearance of a lifelike doll (Coppélia). But rest assured, this is no “Lars and the Real Girl“– instead, San Francisco Ballet’s take is filled with sweeping dance, uplifting acting, intricate set design, and Léo Delibes’ melodious score. 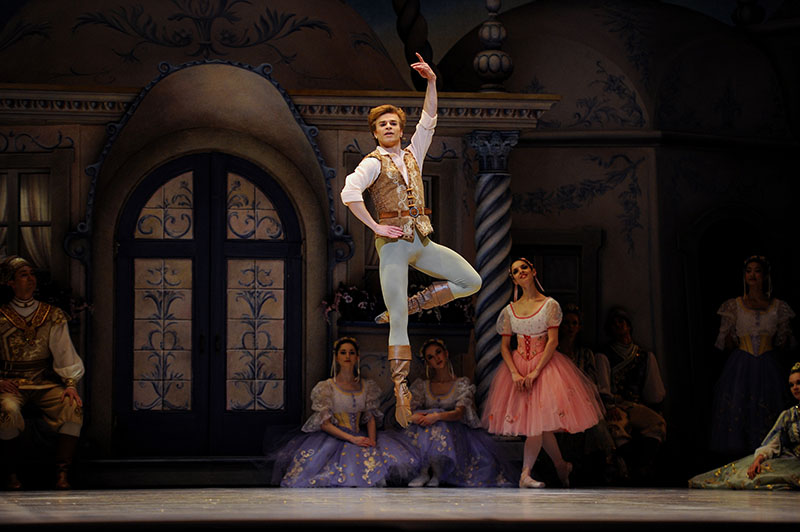 This particular production of George Balanchine and Alexandra Danilova’s picture-perfect “Coppélia” is fairly unique, in that SF Ballet co-produced it with Seattle’s Pacific Northwest Ballet. The joint effort allowed for all-new shared sets and costumes, which turns this gift into one beautifully packaged present. The ballet itself is a little different from most full-length story ballets. Here, it’s the girl that ends of saving her man, and there’s no steely evil queen or land of wispy, ashen-faced ladies.

Tuesday night, Vanessa Zahorian and Taras Domitro, playing the respective leads of Swanilda and Franz, lit up the Opera House stage. Zahorian balanced her impeccably centered pirouettes and hops en pointe with a genuine smile and her infectious humor. This dancer has always been a favorite of mine for her steely technical feats, but here, she also let her sweet side show through with her adorable and well-played pantomime.

Domitro was a perfect match for her, with his Justin Timberlake curls and flirtatious smile. But while playing the boy-next-door crossed with a tad dash of slightly gullible dolt, he’s got more than just good looks on his side. Domitro flew into the air as if he had a jetpack attached to his costume, and his jumps hung aloft as if you’d pressed pause, giving you time to appreciate his full-bodied stretch. Domitro’s polish takes him from a simple looker to THAT guy. There’s a finesse in the way he completes each step and cleanly closes his fifth positions that hints that he’s got more than just a bag of tricks. He’s got style.

Judith Fugate, Garielle Whittle, and Artistic Director Helgi Tomasson‘s coaching paid off in spades, as the company itself looks amazing, probably the best form I’ve ever seen in my ten-year history.

And in Act III, the younger girls from the ballet school, adorned in peach-pink tutus and led by Soloist Courtney Elizabeth, deserve not only a cuteness award but one for steadfast attention spans. And Ricardo Bustamente‘s Dr. Coppelius is a hilarious mix of loony uncle and mad scientist.

Roberta Guidi di Bagno‘s scenic take on the town strikes a chord, from the teakettle house to the blooming trellis and the elaborate doll shop. This full-on visual kaleidoscope brings the entire stage to larger-than-life wow and creates a lasting impact well after the show is done.

“Coppélia” employs a strobe light in Act III, and while it’s a great date night, it’s also incredibly family friendly. Catch it if you can.