Seeing two full ballet programs, over four days, filled to the brim with impressive dancing may have sent me pirouetting into ballet overload. Last night, I dreamt Anne Hathaway and James Franco danced a full-length “Brown Duck,” complete with a giant moon and waddling, wing-flapping geese.

San Francisco Ballet‘s Program 3 and 4 do not include any bird references (thank goodness), but it does feature award-worthy dancing, most notably in William Forsythe‘s epic “Artifact Suite” and Sir Kenneth MacMillan‘s “Winter Dreams.”

What: San Francisco Ballet’s Program 3 and 4

While it’s a shorter version of his original, much longer full-length work “Artifact”, “Artifact Suite” doesn’t cut corners. Instead, dark, elusive imagery pervades. The first portion features dancers in deep, earthy mustard colored unitards and leotards. They follow the Single Female Figure, portrayed by the statuesque Elana Altman last Thursday, as she walks through the stage, weaving her arms around her like a musical traffic cop/deity fueled by the rich, lustrous strings overhead.

Two couples, Yuan Yuan Tan and Damian Smith, and Lorena Feijoo and Pascal Molat, stretch and pull through the corp of angled bodies and syncopated beats, and we see bits and pieces as the fire curtain falls with a whack and rises high into the rafters. Lit in warm, rich golden tones from the exposed wings, it’s like we’re looking into the past, seeing savored chunks of history without much context. It’s confusing, but at the same time, wildly exciting. 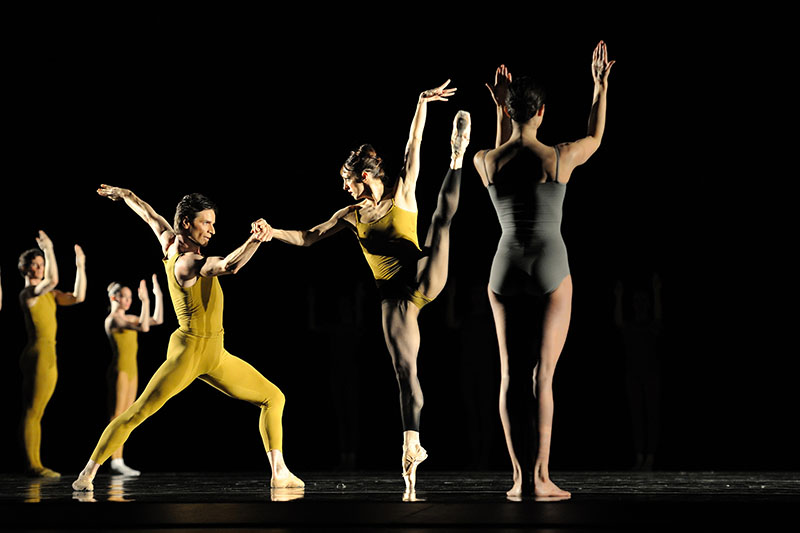 The second half, after a brief pause (mainly for costume changes) brings us dancers clad in calming teal like the sea on a warm spring day. Yet the warmth here is traded for cold blue lighting from above, casting deep shadows across the dancers’ faces and upper torsos.

The cold unknown of what’s to come gives us off-balance lunges and pin-point precision, ripping with a pulsing undercurrent as the Woman continues to lead the corps, clapping her hands as if she’s motivating us forward or shocking us into awareness. And Eva Crossman-Hecht’s dizzying piano enhancements (played with verve by Margot Kazimirska) combined with the “Chaconne” from Bach’s Solo Violin Partita No. 2 adds to this playful and mystical piece.

SF Ballet displayed brilliance with its rendition of “Artifact Suite.” Yet I was surprised when some audience members got up and left before it was over. Were they not prepared for something so modern? Was the crack of the curtain too much? Or were they not ready to interpret the dance as they saw fit? I honestly don’t know, but I think that choreography such as this deserves to be given a shot and seen and reseen several times.

“Winter Dreams” combines European theater with dreamy, luxurious movement. Based on Anton Chekhov’s “Three Sisters,” the ballet follows Masha, Irina, and Olga as they wrestle with their situations. The ballet is complex, with issues of fidelity, loneliness, jealousy, and relationships being explored throughout. It’s like if you took a telenovella minus the evil twin scenarios, tossed in a first-rate choreographer, some earthy Tchaikovsky with a mandolin, and boom. You’ve got yourself “Winter Dreams.”

The piece opens with the maid, setting the scene with a rowdy dance, accompanied by four soldiers. Pauli Magierek, as the maid, performed with zesty energy to the folksy, plucking accompaniment of the onstage musicians. The three lead dancers, Sofiane Sylve, Maria Kochetkova, and Lorena Feijoo, have vastly different styles, yet they complemented each other, and more so, all three showed strong acting chops. In fact, everyone on stage impressed with their ability to go beyond the steps and transcend the audience into a full body-and-mind escapade.

There are two other pieces in Program 3. Yuri Possokhov’s fluffy “Classical Symphony” looked more composed than last year. Full of undulating limbs and dolphin shapes, Possokhov’s ode to his favorite teacher challenges his dancers to play with balance and body isolations. The cast pushed the envelope as much as possible, and all of the principals, including Vanessa Zahorian, Gennadi Nedvigin, Frances Chung, Isaac Hernandez, Dores Andre, and Jaime Garcia Castilla, were in fine form.

Oddly, the women’s tutus look like they limit the movement flow; they include short, mesh skirts lined with a hoop end plus a smaller skirt underneath. “Classical Symphony” may be too cute for its own good, though, and feels more like an ode to fluff than a decisive statement to classical ballet training.

Artistic Director Helgi Tomasson‘s “Nanna’s Lied”, which debuted in 1993, is based on a woman’s growth during 1930s Europe, and this piece rounds out Program 3. Sarah Van Patten, as Nanna, evoked sadness, need, and acceptance easily, as if she’s changing clothes. But the choreography itself seems superficial. Program 4 also includes Tomasson’s premiere of his new piece, “Trio.” Supposedly about remembrance, it instead looks frumpy and disjointed, and is overshadowed by the intense strings of Tchaikovsky’s “Souvenir de Florence.”

Program 4’s other highlight is George Balanchine‘s “Theme and Variations,” a ballet requiring abs of steel and legs of light and grace. It’s pretty yet fun, grand yet not too ostentatious (minus the pastel costumes). On Sunday, Vanessa Zahorian displayed her usual rock solid technique, but she’s also grown as a dancer, and it’s extremely evident here.

Earlier in her career, she seemed like a technical wizard, but in the past few years, she’s added a lovely suppleness to her upper body. And it’s even more of a joy now to watch how she connects Balanchine’s supremely difficult step sequences with such ease, as if she came out of the womb born this way. Perhaps Lady Gaga is playing on her iPod.

Mixed bills can often be hit or miss, but both of these programs have real winners.