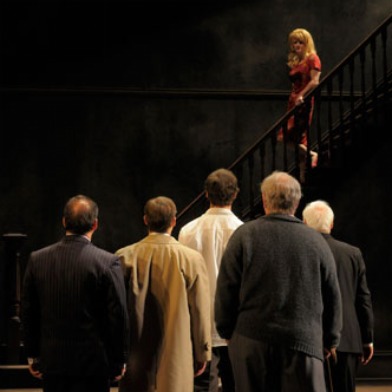 Harold Pinter was one of many European playwrights to emerge from the rubble after World War II and produce what viewers and critics together would, with a mixture of delight, gravity and, above all, bafflement, call “absurd.”

Pinter is absurd because, in his plays, the past exists as a merciless stream of hinting, insinuation, innuendo, cryptic reference, threatening implication and bare-faced fabrication; there is no knowing it for sure. Without a manifest past, though, we have no hope of ever understanding the present, at least in the way that the theatrical present is usually understood – that is, as the enactment of so many contrasting and conflicting, psychologically explicable motivations. To the extent that we can bundle these motivations into a single coherent entity called “plot” and feel confident we could describe said entity in conversation if called upon to do so (even if four or five drinks in), we will go home satisfied.

In this sense, Pinter is pretty frustrating. But not absurd. He simply picked up on something that, up until mid-century, theater never dared to acknowledge: in the human memory, there is no veridical past. We are not computers; we are not built for simple storage. For us, the past is strategically remembered and misremembered, created on the fly and positively denied as suits our present selves.

These are the dynamics that constitute the, er, happenings of The Homecoming – what is often considered Pinter’s masterwork. Of “plot” in the usual sense, we can say that Teddy, the eldest of three sons, has made a surprise visit home to introduce his wife, Ruth, to his semi-estranged family, a gesture that he has every reason to be nervous about. There is an ineradicable history of sexual infidelity and familial betrayal lurking just under the surface here between Dad (Max), Dad’s dead wife (Jessie), and Uncle (Sam). These transgressions – some of which do, ultimately, take fairly clear form, a rare allowance with Pinter – have made all too much of a mark on younger sons Lenny and Joey. Suffice it to say, Ruth is in for some rather forward propositions from the gang.

The Homecoming, as compared to many of Pinter’s other plays, has a great deal of stage potential: its cast is relatively large – 6 characters – and the dynamics in place between them can be as hilarious as they are unnerving when done right (Lenny is, it appears, a pimp, Joey a boxer, Teddy a professor of Philosophy; so you can imagine …) Sex enters the mix frequently; its arrival ranges from frightful to uproarious to just plain puzzling. Here’s one of my favorite moments – one in which a philosophical treatment of being vs. not-being lumbers inanely to chairs (philosophically speaking), to firewood (not philosophically speaking), to this:

Ruth: Don’t be too sure though. You’ve forgotten something. Look at me. I … move my leg. That’s all it is. But I wear … underwear … which moves with me … it captures your attention. Perhaps you misinterpret. The action is simple. It’s a leg … moving. My lips move. Why don’t you restrict … your observations to that? Perhaps the fact that they move is more significant … than the words which come through them. You must bear that … possibility … in mind.
Silence.
Teddy stands.

The American Conservatory Theater’s presentation, directed by Carey Perloff, certainly amps up the comedy, and René Augesen – one of A.C.T.’s core acting company members – slathers on the sexuality in her portrayal of Ruth to the point of gratuity (this and some noticeably phony British accents are my only real gripes, acting-wise). In a word, the approach is entertaining. This is not to say that Perloff stamps out The Homecoming‘s more delicate complexities. The text allows for a variety of approaches, some more easily palatable and some more mean-spirited. While this production primarily pursues the former, the disquieting silences and discordant notes remain.

This production offers up a play that has aged remarkably – or rather, not at all – since its 1965 debut. Pinter, I believe, will remain a force to be reckoned with in drama for decades to come, and an opportunity to see one of his works in San Francisco is not to be missed.

The Homecoming plays at the American Conservatory Theater (you can buy tickets here) through March 27.