For dance lovers who flutter toward the technologically sublime, Yuri Possokhov‘s artistically modern ballet “RAkU” might be right up your alley. In his twelfth ballet for San Francisco Ballet, Possokhov has created striking imagery through his beautifully intricate, continuously sinuous duets. But his mystical mojo extends further than just the dance itself. From first sight, it’s obvious that Possokhov has had a hand in everything, from the sparse yet fitting costuming for the leads to the Ikea-lite bookcase-reminiscent set that multi-tasks as a landscape to his historical and fiery projections, which illuminate the stage.

The story of “RAkU” isn’t for the light of heart; Gary Wang, a friend of dancer Yuan Yuan Tan, created his own legend based upon the burning of the Golden Pavilion. The 35-minute ballet follows two lovers, a monk who covets her, and the devastating consequences when her lover goes to war.

Tan portrays the female lead, and her duet with Damian Smith plays with gripping lifts, arcing shapes, and intricate twists of body and limb. On Saturday, Tan and Smith connected the steps in a free-feeling upward motion as if together, they’re building to something bigger, larger, something more exhilarating than just the two of them. Pascal Molat, as the desirous monk, combined passion with boiling anger, and seeing him partnered with Tan later in the ballet brought conflict and strife center stage. 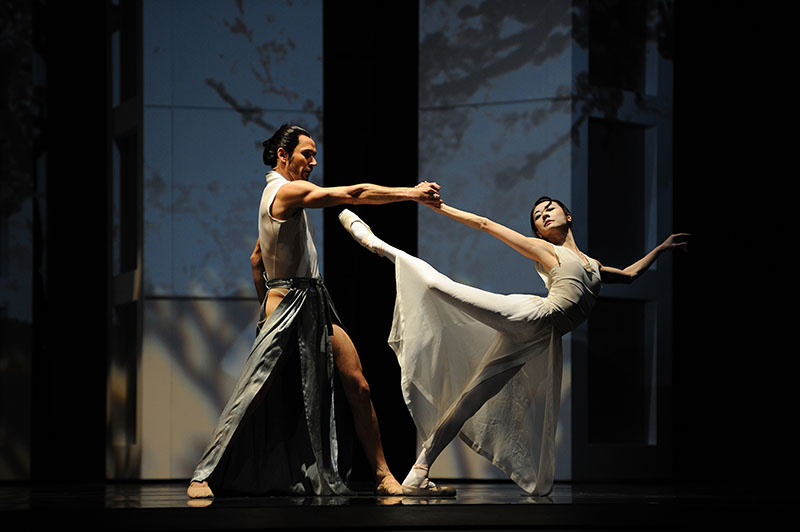 Possokhov’s four supporting warriors moved with their weight rooted in their lower halves; they reached their legs wide out to the side, flexing their feet as if initiating their stance from the earth, almost like a horse ready to stampede the wild plains. The movement rolled from their heels back up their bodies to their extended fingers and back down, rippling as they move together or in canon. Imagining what it might look like with a stage full of warriors instead of just four, this is one place where I think Possokhov may have skimped. But simplicity does have its own allure.

In Japanese, Raku can have several different meanings depending on how it’s written, including comfort, ease, or relief. But it can also mean burn. And “RAkU” certainly does burn.

In addition, Program 2 includes George Balanchine‘s “Symphony in C”, one of his most revered neoclassical tutu ballets. Each of the four pristine movements has its own distinct mood, with the second one being my favorite for its indulgence of port de bras and Swan Lake-esque mood. On Saturday, Sofiane Sylve infused utter regalness into this second movement, and Clara Blanco, dancing the lead in the fourth movement, showed off crystal clear technique and extreme confidence. Blanco excels at most everything, and she’s paid her dues. It’s time she be promoted!

Nicole Ciapponi, paired with the surprisingly underwhelming Isaac Hernandez, led the third movement. A first-year corp member, she’s a teenage (17, I believe) spit-fire, throwing about larger-than-life leaps and centered spins as if they were child’s play. It will be exciting to see her develop in the months and years ahead.

If only I had such great things to say about the performance itself. This plotless ballet is light, airy, and pure. One bobble can be ignored, but repeated missed landings and whoopsie-daisies should not be swept under the rug. Courtney Elizabeth and Sarah Van Patten looked great, but the rest was a shambles.

San Francisco Ballet’s first mixed bill program of the season hits some impressive, high notes, but the opening falls flat. Get past it, though, and you’ll enjoy yourself.