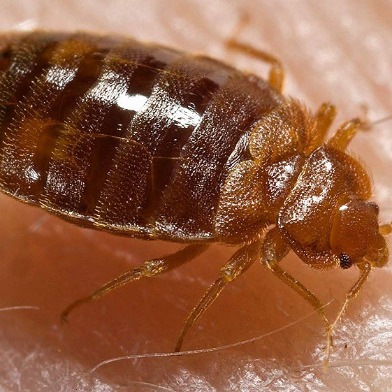 Are you ready for a healthy dose of paranoia inducing bug news? Well, here it comes: the bedbug invasion of SF is only getting worse. Invasion, in the US vs. Iraq/Afghanistan sense of the word – the bugs have held a presence here for a long time but the number of troops are growing over the years. In the past couple weeks, there has been quite a surge.

The Public Health Department has seen a 44 percent increase in cases over the past three years. Since bed bugs lay and hatch eggs quicker and more plentiful when it’s hot, the recent heat wave has caused a spike in cases. Since the hot weather hit, the Health Department has fielded hundreds of calls about the little beasts.

While most complaints come from single room occupancies (SROs) in the Tenderloin, SoMa and the Mission, the bugs can and do show up everywhere. It was once a common assumption that bedbugs are linked to poverty, but that is not the case. All over the country, they have infiltrated upscale condos, private residencies, movie theaters, and even corporate headquarters like the Penguin Group in Manhattan.

To really get a feel for how widespread this is, check out the National Bed Bug Registry, coincidentally started by a San Franciscan. The San Francisco page shows reports in many different neighborhoods, from the Richmond to Russian Hill.

“It’s become an increasingly serious problem in all rental housing in San Francisco,” said Sara Shortt, executive director of the Housing Rights Committee of San Francisco. “If it’s not treated properly, it becomes explosive, and that’s been part of the problem. There wasn’t aggressive treatment by landlords.”

Bedbugs don’t carry diseases but they do leave nasty bite marks on people that are allergic to the numbing agent in their saliva. If you are not allergic, you may be getting bit and don’t even know it. For example, this SFBG writer reported last year that it took a while to figure out what was going on when his girlfriend was getting bit every night but he was not.

So, what do we do about it? First, figure out if you have them. Bed bugs only come out for short periods of time and are good at hiding. If you find dark spots (blood or feces), shed skins, eggs, and dead bugs on your mattress, box spring, or linens, you probably have bed bugs. It is recommended that you actually find a bed bug before you start freaking out at your landlord.

Read the many ways to catch a bed bug at this site. If you really think you have bed bugs and you are unable to find one, then why not enlist the help of a bed bug sniffing dog? Yeah, they actually train pups to sniff out bed bugs!

If you find out that your fears are true, you’ll need to take serious action. If you rent, for goodness sakes, get your landlord involved. Don’t be scared, it’s most likely not your fault. Janna New, Director of the San Francisco Apartment Association, told the reporter at SFBG that she has never heard of anyone getting evicted for harboring bedbugs.

A friend of mine who has lived in a studio at Geary and Leavenworth for over a decade now has had a long battle with bed bugs. He hadn’t seen them in a couple years until they returned last week. He moved his bed to the middle of the room, bought a steam cleaner, washed practically all the fabric in his house in super hot water, and is now going to throw away his couch. Complaining to the landlord has gotten him nothing more than a bottle of rubbing alcohol. Despite the wonderful rent control he has on his place, he’s looking to move because, well, wouldn’t you?

While my friend is pessimistic about working with his particular landlord, their action is really the only way to stop the bugs from infesting more rooms and buildings. Janna New told SFBG “The bedbug issue is complicated and it really boils down to cooperation… Teamwork is the only way to get rid of bedbugs”.

For more information about what to do if you have bed bugs, check out this informative article. If the infestation is bad, don’t go at it alone – contacting a pest control company is the best thing you can do.