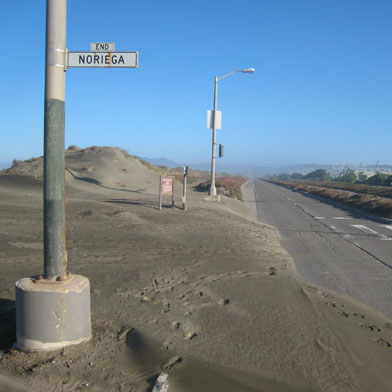 Appeal pal Akit noted that on his commute to work Thursday morning, Great Highway was closed at Lincoln, “but it’s a little bit odd. The metal barricades was in the open position, and there was only a bunch of traffic cones blocking the entrance to the stretch. Also, the signal was still running on red-yellow-green cycle when it was supposed to be operating in 4-way stop.” As it turns out, however, the closure was not approved by any city agencies. Is a renegade urban planner loose in SF?

Akit says that he called 311 and the Taraval police station, but no one knew what was up or why the stretch of road would be closed. And neither did Christine Falvey, Director of Communications and Public Affairs for the Department of Public Works, who said that she was almost always informed when a street closure is made.

After sending a DPW worker out to check the scene, she called back saying that as of 10:45, a worker had checked out the scene and removed the cones, and that she thinks “it was a bit of a prank.”

She also says that the worker drove the length of the road, to make sure it was free from excessive sand (like that in the photo, above, taken last fall) or other obstructions.

Akit notes that the unsanctioned closure created a significant hazard, as the closure “forced four lanes of traffic to turn left into a two lanes and raises the risk of a collision.”