Take A Tour That’s Not For Tourists 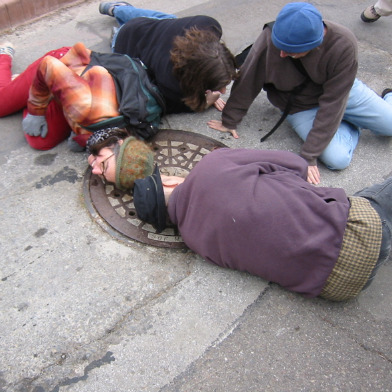 “I use Golden Gate Park as a freeway,” said biker T.J. Mitchell.

“So that mean’s you just whiz by and never to stop to find out more?” asked Joel Pomerantz founder of ThinkWalks, a series of historical San Francisco tours.

Pomerantz asks everyone this question. So if you’re one of those aforementioned busy bodies that doesn’t take a split second to look up from your feet moving one destination to the next, you might want to try out a ThinkWalks tour for yourself. Pomerantz’s tours gives people the chance to stop moving so fast and learn a little more about the environment they interact with everyday.

On the Outside Lands Bike Cruise earlier this month, Pomerantz showed how Golden Gate Park, once a land of sand dunes, has transformed over time with man-made changes. Paradoxically, he noted that the park – a place where people think is most natural – is actually one of the most artificial environments because it’s essentially a garden.

But he explained that what humans do to interact with nature is nature, too. “It’s important to recognize we’re part of nature. If we separate ourselves, that gives us an excuse not to pay attention to the long term effects we make on it,” Pomerantz said. “We need to be intimate and familiar with nature.”

Besides landform changes, he also explored the social changes that came along with them. He showed the group laminated slides of old photographs and told stories of the pre-car society that occupied Golden Gate Park. It use to be a place for air balloons, elephant ambulances, and horse carriages transporting the wealthy. (Seeing that back then was the equivalent of seeing a celebrity in a limo!) Such evidence of the past lie hidden in the park and Pomerantz helps share these discoveries.

Pomerantz’s tours are not the type designed for tourists, nor is he your typical tour guide. He customizes the tours depending on the group’s interests. Rather than the standard one-way feed where the tour guide talks and the tourists nod, Pomerantz encourages participants to ask questions and start discussions.

And you can tell he’s really passionate about the subject and cares a lot about the group. He carries around extra “Do the Wiggle” sweatshirts in case people get cold and provides goodies for everyone like mixed nuts covered in homemade curry. (Those are a must try!) Most generous of all, he also lends out a bike to those that need one for his bike tours.

So if you’re idly wandering the city on a weekend, might as well join Pomerantz for a more engaging and insightful wander. You have no idea how much San Francisco knowledge this man has! He’s like a walking encyclopedia of local art, waterways, public transportation, and environmental history. He does all his tours for free out of his own time and based on his own research, so donations would be highly appreciated.

He does four standard tours that include both bike and walk tours. His upcoming tour will be a Social Justice Mural tour on July 31. He’s actually the man behind that familiar Duboce bikeway mural you see once you get out the tunnel on the N! You can see more future tours scheduled here.

Photo: By Rich Coffin, of ThinkWalks Water Walking tour participants listening to a creek in the sewer at Clayton Street