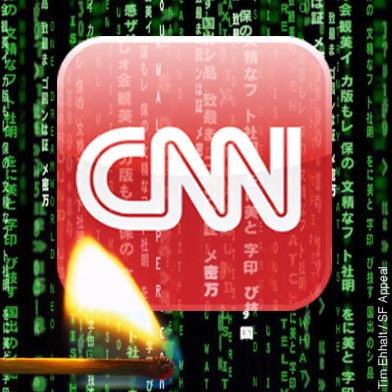 For the past few months, I’ve been writing weekly column dispensing intentionally terrible advice about how to handle awkward situations online with an air of mock authority that underscores the vacuous banality of the advice itself.

I like to think of it as a commentary on the mean-spirited, anything-for-entertainment mindset of the online world and simultaneously a satire of the seemingly definitive, yet completely unqualified, expert that’s been behind every advice column since time immemorial.

In reality, it’s a slapdash collection of offensive jokes and links to strangely addictive YouTube videos.

I consider it my life’s work.

Recently, it’s been brought to my attention that CNN has commissioned the people who run the blog, Stuff Hipsters Hate to write a nearly identical column about internet etiquette, or as they call it, “Netiquette.” What’s the best way to engage them in a flame war that leads to the largest spike in my pageviews?

Before I get into the virtually limitless flame war options you have before you, its important that you first get over yourself.

Coming up with the idea for a joke column about online manners does not make you the advice columnist version of Francis Crick. It just makes you a guy who thought Ken Layne’s advice column on True/Slant was funny. The only people who claim to know anything about social media are self-important douchebags who have no idea what they’re talking about, so you could impersonate one without anyone batting an eyelash.

Besides, Dear Prudie has been dispensing advice on internet-related issues on Slate for years before the idea even popped into your head. I can’t technically vouch for the accuracy of that statement. I’ve never able to bring myself to read one of her columns its entirety because it’s just terrible.

Come to think of it, everything on Slate is terrible. All their articles are just a parroting of conventional wisdom disguised as knee-jerk contrarianism. Why they think they can cover subpar writing by giving each article three different, yet equally misleading, titles over the course of two days is beyond me.

(This is where I’d normally say something mean about Christopher Hitchens, who regularly writes for their site, but Hitch just got diagnosed with cancer and, despite his perplexing post-9/11 bloodlust, it’s clear the guy just likes to stir up trouble, and I wish him well. Anyone with the balls to write a book attacking Mother Teresa on moral grounds deserves at least a modicum of respect.)

Anyway! It’s important you don’t go into this flame war thinking your idea was anything special or original. The less in love you are with your idea, the less likely you’ll be to actually get angry at someone when you believe they’ve copied it.

The number one rule of getting in a fight with a complete stranger on the internet is not to get emotional. If nothing else, the internet is a million-headed hydra that feeds on genuine emotion and excretes snark. It’s like a black hole for sincerity; once something completely without irony gets inside of its event horizon, escape is a physical impossibility. The side that brings the most genuine emotional investment to a flame war is guaranteed to lose simply because they have the most skin in the game.

This is why your first instinct in the flame war you want to start with the people behind CNN’s internet manners column–claiming that you came up with the idea first–is precisely the wrong one.

There’s a reason why kids in middle school think sneering “you copied me, I was the first one to every do X.” It’s because middle school kids are stupid. It doesn’t matter if X=wearing a red sweatband on your right wrist or if X=playing with a yo-yo–patent lawyers withstanding, no one cares about who thought of something first. If you start whining that CNN stole your idea, your flame war will fizzle before it even starts.

What sort of flame war tactics will be presented by our expert to this hapless advice seeker? Hang in there — we’ll be back with part 2 later this afternoon (here it is!), since we understand long articles can be confusing.