“We’re not trying to get into an Apple commercial”: Hot Fog 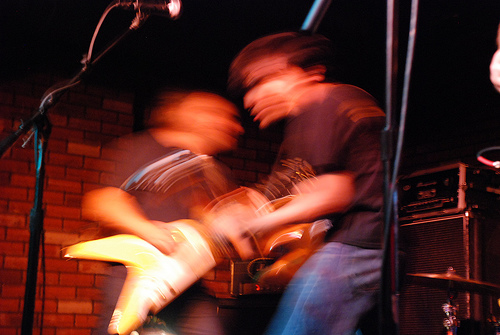 The Bay Area’s been known as a hotbed of genre bending underground music for decades. Recently it’s been hard to ignore our contributions to underground hip-hop, but don’t forget our gifts to Metal: Metallica, Megadeth, Testament, High On Fire, the list goes on. Music historians and musicologists widely consider San Francisco a birthplace of the genre itself: back In 1968, San Francisco’s own Blue Cheer released a cover of “Summertime Blues” on Vincebus Eruptum, widely considered the first Metal album ever made.

Newer than that is Hot Fog, a metal band comprised of former members of Film School, Oranger and Overwhelming Colorfast. They came to my attention two years ago for one very basic reason: I knew all 4 members and one of them used to be my boss.

But as time’s gone on I’ve noticed a progression. When Hot Fog was just starting out, they played obscure metal covers, and did so very very well. Nobody left a gig without sweating. Always a good time.

But about 6 months ago I noticed originals: new metal. Their own.

Checking the band out online revealed an upcoming release of a new EP (awesomely titled Wyvern and Children First) and a show on June 19 with Earthless at Bottom of The Hill. Three of four members were able to make it for a chat, so Isat down with Mike Drake, Tim Mitchell & Donny Newenhouse at the Latin American Club to catch them before they get too big to talk to me.

Their website speaks of dungeons & dragons, but what I discovered were three happy musicians with an intricate knowledge Rock & Roll’s most technical (and fun) subgenre. I really didn’t have to do much talking. Show me your horns, SF – Hot Fog can entertain themselves. You’re part of the fun.

So, I have to ask: Are you an obscure Metal cover band? I’m confused.

Mike: We had an argument about the direction of the band. Tim was bringing in more big metal epics so we decided to just learn good covers we like, mostly early 70s protometal, early Motorhead, obscure metal stuff to learn.

Tim: We did a Judas Priest tribute. I was gay for a day, I wore leather all day and got the best blow job of my life.

We already had all the music, all of us own it already. Then everyone came on board – we figured it out together.

You get caught up in the pretense of being an “artiste” when really the formula is half elf, half oil & half wizardMike: It got very collaborative which is the way bands should be. the number one rule is to entertain yourself.

Donny: Yeah, have a good time all the time

Well, you’ve all been in other bands – Mike in Oranger and Tim & Donny, you’ve both played in Film School – Hot Fog is Metal. And you write originals now, right? Why suddenly a Metal band?

Tim: All of us had realized we’ve all been playing music since we were 11 or 12 years old. Ultimately you get caught up in the pretense of being an “artiste” when really the formula is half elf, half oil & half wizard. At the end of the day music is entertaining people. Rock and roll is rocking out and having a good time and I think we were all tired of pretentious bullshit polluting the world. Yeah. (pause) If we we have a manifesto, it’s that.

Mike: I think 1st have a good time all the time. But now we’re only in it for the money

Donny: Yeah, you still want melody in there somewhere

Tim: Does the world need another indie rock band?

Donny: We’re not trying to get into an Apple commercial

Tim: It’s fun to play and watch. If you’re having fun, everyone’s having fun. We’re here to have fun and make people rock out

Mike: But also we’re playing blistering metal and Arcade Fire is not.

Tim: It all boils down to being 13 years old and in our bedrooms playing guitar. What were we playing? Maiden and AC/DC. My 1st guitar I learned AC/DC and Iron Maiden. That was the best music in the world

Donny: I actually quit a metal band to be in Film School because I wanted to do something musical. It’s a subjective thing but it was always very serious. And in (Hot Fog) we put in the same effort – but it’s more fun.

Tim: People forget there’s all kinds of music, metal always gets written off. They forget and we’re here to fucking remind them. That’s it. There’s a reason why metal is awesome. Punch rock and metal came from the same neighborhoods in England but in a way punk rock is douchier. Spandex & mohawks.

Donny: On tour, we realized our fans live for us. You gotta do what you gotta do. Next tour I want to stand in Brussels with, like, our banner behind us saying “Mission Accomplished.”

So, all of you have lived here and been in the Bay Area a while, right?

Tim: Me? Saratoga. Allen – he’s not here – is from San Mateo

(All 3 argue about who is more local)

Donny: Tim is a valley guy, because…

Tim: I don’t know what he’s talking about. People think I’m Mexican, because being Mexican is more metal.

Mike: Is that what you tell your Asian self?

Tell me about the legacy of Bay Area Metal – I’ve only lived here for 5 years.

Donny: You feel it

Tim: That’s why metal is awesome.

What about Some Kind Of Monster?

Mike: we can be sad about Some Kind Of Monster

Tim: but they are still the best metal band. Hetfield is a Metal God.

Tim: We have respect for our CA metal roots.

Mike: San Francisco has a rad history in metal and that’s what we want to continue

(Donny, Tim & Mike side track about which bands “rock the hardest”)

Tim: I think Sabbath rocks the hardest. Of all time.