Hell on Two Wheels: A Modest Proposal For C.W. Nevius 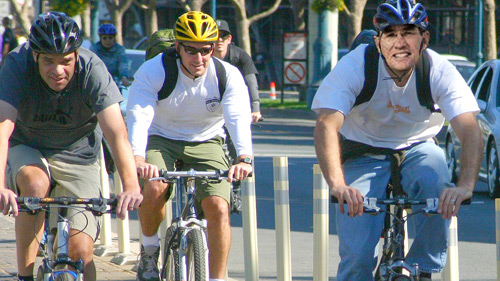 Longtime San Francisco Chronicle columnist C.W. “Chuck” Nevius is back to actually living in the city that he writes about after years of commuting to 5th and Mission from Walnut Creek.

While I’m not personally a fan of his work, and he’s drawn the ire of the city’s cycling community on multiple occasions, there’s nothing I like more than welcoming people to San Francisco, so: Welcome back to San Francisco, Mr. Nevius!

As a city resident myself, I’d like to offer you some unsolicited advice. Now that you’re out of the suburban nightmare of tangled cul-de-sacs and six lanes to everywhere, how about considering riding a bike?

I know, I know, cycling is probably something you think of as only kids, doped-up athletes, hipsters, the poors and evil “progressives” do. But there’s a lot to recommend it even for a silver-maned, 60-something like yourself. Let us count the ways!

And you wouldn’t be alone in late-Boomer adoption of pedal power. Even aging political extremists like Berkeley’s Mayor Tom Bates are suggesting residents of that city follow his example and go car-free, and as a former East Bay resident myself, it’s a lot easier to do here in The City than it is back in your former home county, especially as AC Transit looks to drastically cut service. Even San Francisco’s fiscal conservative Mayor Gavin Newsom musses his hair once a year for bike to work day, and this is a guy who gets driven literally anywhere he wants to go in a hybrid SUV that has gas mileage low enough to have qualified it for the cash-for-clunkers program.

So there you are: Five good reasons, and none of them even alluded to the external costs of car-centric living like, oh, the epic environmental disaster in the Gulf of Mexico. No need to thank me! From one columnist to another, I’m looking forward to your complaints about navigating the backed up traffic waiting in line for gas at Divisadero and Fell. Don’t let me and all the other car-free San Franciscans down.

An “artist’s” rendering of Chuck enjoying a ride in protected bike lanes down the mostly-car-free-Market Street from the Chronicle building to the Tadich Grill for some martinis and Liar’s Dice with fellow columnist Willie Brown. Original photo by Richard Masoner.

Jackson West has ridden a bike around the San Juan Islands, up and down the Cascades, in Vancouver, Seattle, Brooklyn, Austin and all over the Bay Area. He would be happy to go on a bike ride in San Francsico with Chuck any time to show him the ropes. Have any bike-related questions? Send an email!