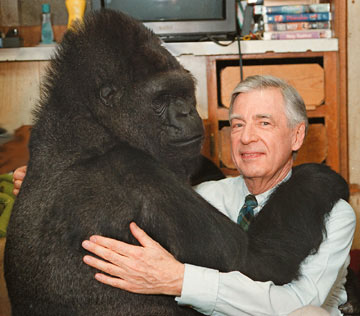 Deadline reports that body pillow fan James Franco will be starring in Rise of the Apes, a Planet of the Apes prequel “set in contemporary San Francisco, where a genetic engineering experiment leads to the creation of intelligence in apes, causing an inevitable conflict between species.”

Franco’s no stranger to SF, having been out and about all over the Castro during his turn in Milk. So will Franco and a bunch of folks in monkey suits be hitting our fair city?

Probably not, says the SF Film Commission‘s Laurel Barsotti. She tells the Appeal that the production, which reportedly begins on July 5 (about a month from now!), has yet to apply for any local permits. “That’s not completely unusual” she says “we typically require a three day lead time, but for a production of this size…it means probably not.”

Larger productions with challenging locations require more of a lead time for approval, “at least two weeks” said Barsotti. Which would mean that if Fox wanted footage of Franco and a bunch of bonobos running around Union Square on the first day of shooting, they’ve only a few weeks to get it OKed. And since the Film Commission hasn’t heard from Fox, well, it looks like the fact that Koko the gorilla’s an SF native isn’t as much of a bargaining chip as one might hope.

Rise of the Apes is expected to be released (it feels funny to write that about something that’s barely started yet) in summer, 2011. It would be nice if they did shoot here, but if not, we look forward to making fun of what they get wrong by shooting elsewhere. Glass half full, people!