Performers Under Stress’ “An Apology…” Reviewed 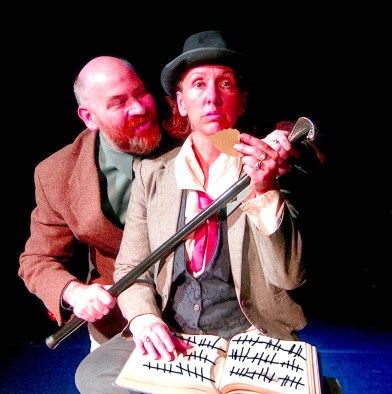 As the audience files into the small black box theatre where Performers Under Stress is staging their little production of Mickle Maher’s brilliant meditation on the Faust legend, Mephistopheles (Valerie Fachman) sleeps silently in a chair on a bare stage save for a single light bulb hanging directly overhead. The impression that this servant of the devil has been planted there for a long time is an apt one because the play takes place during the final hour of the infamous 24-year deal that Dr. John Faustus (Scott Baker) made with the devil–infinite knowledge and power in exchange for his immortal soul.

When Faustus comes stumbling onto the stage, the first thing he does is turn on the light hanging just above Mephistopheles’ head. The completely exposed bulb has an interesting effect–it makes it almost painful to look directly at the demonic minion casually perched in the single piece of onstage furniture.

What: An Apology for the Course and Outcome of Certain Events Delivered by Doctor John Faustus on This His Final Evening
When: Thurs-Sat 8 PM until May 22
Where: The Garage, 975 Howard at 6th Street
Tickets: $7.50-$15, buy here

It’s a nice touch because just as it’s difficult for the audience to look directly at Mephistopheles, it’s equally hard for Faustus. Instead, he whines about fate, obsesses over the past, fruitlessly attempts to live entirely in the present moment and, save for one solitary exception, insists he has no regrets. He expresses remorse only in that he was never able to keep a proper diary. On the first day of his deal he found Mephistopheles, who served as his own private minion, reading this record of his most private thoughts. His oh-so-clever way of dealing with the intrusion is to continue to continue to keep the diary but fill it only with random hatch marks–signifying nothing except that he wrote them. “If hell will not know Fausus,” he asks Mephistopheles accusingly, “than how will Faustus know hell?”

He compares it to Sisyphus’s rock, which after enough repeated trips up and down the mythic hill, was so caked in dirt and mud that “what he had was not a rock, but a record of all the times he had pushed that rock. It’s completely meaningless,” he says with a chortle that suddenly catches in his throat, “or it’s a life’s work.”

If you catch a hint of Samuel Beckett’s trademark existential dread here, it’s definitely intentional. Performers Under Stress have been lauded for their bare-bones productions of Beckett’s works and this show most strongly calls to mind Cutting Ball‘s equally brilliant 2009 production of Krapp’s Last Tape. Both shows ask a similar question: what’s the point of leaving a record for the world when the world, with all of its vast infinity, doesn’t seem to care? If our lives have no meaning, what’s the point documenting them? Besides, do we even have much of a choice in the matter in the first place?

Much like Morris Panych’s Vigil, which closed last month at American Conservatory Theater, An Apology… is less an extended monologue than a two-person dialogue, in which only one personal actually speaks. Fachman silently stalks the stage with the calm, measured nonchalance of someone who has both infinite time and infinite patience. She brings to the role an elegantly practiced specificity of movement that more than matches Baker’s blustery Faustus.

Clocking in at just over an hour, An Apology is long gone before it even starts to wear out its welcome and, midway though, Faustus treats the audience to a snack of chips and beer while appreciating how 7-11 didn’t change its name when the store began staying open around the clock.

Any show that can simultaneously demonstrate both the beauty and the deep, existential sadness present in each and every one of the thousands of 7-11 locations around the globe is a masterful one.