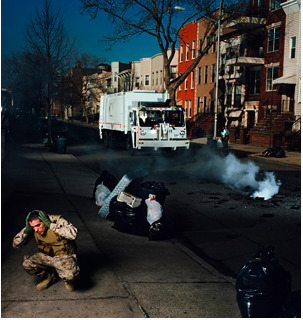 We have been at war for a long time now. It’s easy to say it’s been too long. Few of us, even the war’s most ardent supporters, seem to have any effective strategies for articulating how we feel about all of the wars our country participates in or perpetuates.

How do we process the rapid-fire pace of information we receive online and on our phones, in our entertainment and well, everywhere, about the war, the people protesting the war, or fighting in the war, or dying in the war, or profiting from the war? How can we turn this information into intelligent reflection or thoughtful action? Well, we can go to SF Camerawork for starters.

What: SF Camerawork’s Spring Exhibitions
When: May 6-August 7, Thurs-Sat 12-5 PM. Opening reception Thursday, May 6, 5-8 PM
Where: SF Camerawork. 657 Mission, 2nd Floor.
Cost: (suggested donation) $5 for general public , $2 for students and seniors , free for SF Camerawork members. Free admission for all the first Tuesday of each month

On Thursday evening, Camerawork is opening two distinct exhibitions that step into the eye of this hyper-reality storm; Jennifer Karady, In Country: Soldiers’ Stories from Iraq and Afghanistan and Christopher Sims, Theater of War: Pretend Villages of Iraq and Afghanistan.

Both exhibitions reveal elements of the culture created by a war that have little or almost nothing to do with the war itself. By critically examining soldiers’ lives and experiences in the varied ways Karady and Simms have, viewers are offered a way through this thick and heavy weight of the war.

Each of Jennifer Karady’s photographs have a long and deep history, beginning with extensive research and interviews with the veterans about their experiences in Iraq and/or Afghanistan. The interviews are then constructed into narratives that are carefully staged in collaboration with Karady and each veteran she works with.

What makes these photographs so remarkable, something different from the endless drone of war information and dramatization, is that they are without a distinct point of view on the war itself. By making the veteran’s memory and experience hold the weight of the contextualization, these photographs (and with them the photographer and subjects) are liberated from being pigeonholed as for or against the wars. They are images re-telling stories of people involved in combat and even through the gore, intensity and throbbing emotion, they give us space to witness intelligent articulation about these too long wars.

Christopher Sims is the recipient of the 2010 Baum Award for Emerging American Photographers. Camerawork exhibits the work of the Baum award winner annually and Sims’ work is an excellent companion to Karady’s exhibition. Across the country, the US military has set up entire simulations of Afghan and Iraqi communities to serve as training facilities for soldiers to ready themselves for actual situations. Sims took on the role of war photographer in one of these villages which laid the groundwork for this surreal body of work.

Sims himself notes, “Here, backstage in the war on terrorism, I see insurgents planting a bomb in a Red Crescent ambulance; American soldiers negotiating with a reluctant mayor; a suicide bomber detonating herself outside of a mosque; and villagers erupting in an anti-American riot. The designers and inhabitants of these worlds take great pride in the scope and fidelity of their wars-in-miniature. By day’s end, hundreds of soldiers and civilians lay dead–the electronic sensors on their special halters indicating whether friendly fire, an improvised explosive device, or a sniper’s bullet has killed them.”

Both exhibitions, on view at Camerawork through August 7, masterfully re-construct true war stories by allowing all of the ways in which we consume the war to collapse upon themselves. Neither artist will let us off the hook by locating their work in one side of the dove or hawk binary vernacular of these wars but then again, neither artist will stand for any of us to passively absorb the war stories the same way again.