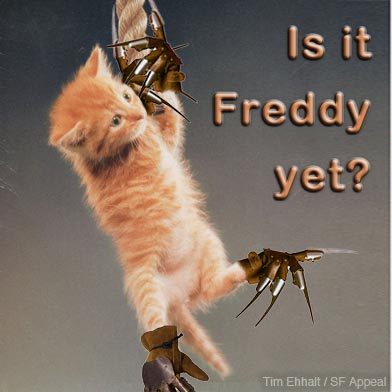 What do you think, is the new Nightmare on Elm Street movie going to be good? Neither Appeal movie writer Katie Doze nor I have any idea, because we weren’t invited to any press screenings. So we are speculating (mainly because we wanted Tim to make us a “hang in there baby” type poster of a kitten with Freddy claws). Tell us we’re brilliant or full of shit in the comments.

Eve: You are the biggest Nightmare fan I know, besides me (and I know myself poorly). Can you think of any guys who are into the Nightmare movies? Are they chick flicks?

Katie: I know that guys are super-into horror movies, but none into Freddy. They are more into Texas Chainsaw.

Katie: Zombie fans are the worst. Freddy is the boyfriend we always want.

Eve: He’s your boyfriend now! I wish you could have seen the tongue thing I did as I typed that

Katie: He’s funny, cynical, and will murder the stupid chicks and the stupid dudes, but never the strong characters, like Nancy.

Eve: Wes craven loves him a Final Girl and I’m cool w/ that. Men always let you down in Nightmare movies. All you had to do is stay awake, Johnny Depp! You and your half shirt! And Nancy’s fucking dad!!!

Katie: Ugh, half shirt. Wes’ movies are always the “no one believes the chick but she’s always right.” And no one ever believes me, but I’m always right.

Eve: You have Cassandra Syndrome! Well, since you are always right, tell me
Is the new movie going to be good or not? We should note that neither you nor I have screened the film, so we are talking out of our asses! Even more so than usual.

Eve: But…Jackie Earl Haley, who is, arguably, a better actor than Robert Englund?

Eve: WHAT THEY ARE?

Eve: Did you see that Scream 4 interview I shared?

“this is a look at horror after 10 years of a lot of sequels rather than original films coming up year after year. One film is successful, and then they make 25 of them. I think it’s time for something new. I’ve done remakes of my own films, too, with The Last House on the Left and The Hills Have Eyes, but we feel it’s time for something new and different, and that’s what this film is going to be.”

Katie: Unfortunately, the something “new and different” will have, from what I’ve read, specifically about the new Nightmare movie, a lack of villain humor and character. They will be killing machines with a slight sad component, so someone in the audience will feel justified for feeling empathetic, but overall, it will be shells.

Eve: oh like “of course Freddy’s killing those kids, he’s all mad about getting killed by their parents”? That’s the Jason idea, right?

Katie: I think so, i never liked that series

Katie: okay, so what I’ve heard is that they’ve thrown out the one-liners of Freddy and have made him more sinister and killer, which I am opposed to!

Eve: Trying to make someone sinister never works. It’s like trying to be a hipster.

Eve: I know! That’s why I was genuinely surprised to hear you say “BAD”

Katie: his voice, his amazing body, his character acting is top notch

Eve: He was the only good non blue cock thing in Watchmen!

Katie: RIGHT SO! I think that they made Freddy less funny because Jackie Earle Haley, in recent times, has had very serious dramatic crazy roles. I would LOVE to have him play the old Freddy with the humor from his older movies, like Breaking Away or Bad News Bears. Because, Robert Englund, as much as he has made Freddy an icon, he didn’t deliver the one-liners as good as Jackie could.

Okay, I have a BIG PROBLEM

Eve: Yes? I saw her “replacement” on Bonnie Hunt yesterday

Katie: She looks like a teenager herself, she’s skinny, and she’s a DOCTOR

Eve: That is so funny you say how young she looks, because Tim came in and I said something about Nightmare and he said “is that Nancy?” And I was all YEAH MORON NANCY’S 40 IN THIS ONE.

Katie: Really? I hope so.

Eve: Yes, wait for the part where Freddy quotes Twain

Katie: “the coldest summer I ever spent was the summer not spent killing in the boiler room”

Katie: I think what I like about the Freddy sequels, is that every movie was different, so Freddy’s “signature” kills/moves, etc were different. I HATE the kitsch of sequels that use the “cool” thing of the original over and over again. So even though I think the differences in this remake will be bad, I hope they don’t do the stupid Mission Impossible 2 thing

Eve: Who do you think is the target audience for this movie?

Katie: early 20s. People who don’t remember a time at all when the original movies came out.

Eve: Really? Not people my age, older, who saw the orginals in the theater? So you don’t think itll be the nostalgia crowd? For perspective, the movie came out when I was in 8th grade, I think. Or summer right after.

Katie: Did this happen to Nancy? NO – she ran around. I’m too old to understand teens these days!

Eve: OK, well, if you just think kids are goimng to see that movie, where can we go see it? Because I still want to! Do we need to go to, like, a 10 AM showing? That’s what Willie Brown does. MY GOD WE ARE AS OLD AS WILLIE BROWN.

Katie: Yeah, I’ve been thinking about that too. We’ll have to see it in a month.

Eve: It’s only at the Metreon

Eve: or that Daly city theater I’m kind of ambivalent about. At Metreon you are fucked because if someone’s a jackhole in the movie, no one who works there. I think I will have to do a morning show.

Eve: Freddys in the making! We still have midnight tonight! It’s a SCHOOL NIGHT!

Katie: too many broke ass stuarts

Eve: HAHAHAHA. I don’t know what that means. What, is it free tonight?

Katie: those type of people go to midnight shows

Eve: or do you mean men in hats? OH MY GOD BROKE ASS STUART IS FREDDY