How Loud Is Too Loud To Play On The Streets Of SF: The Ferocious Few 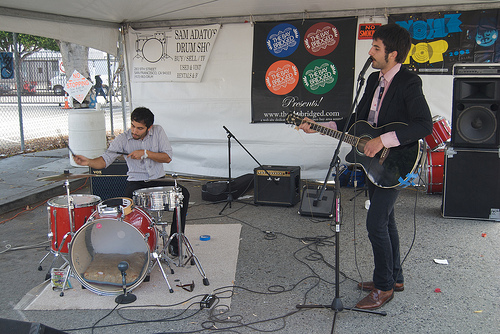 Two summers ago I got cozy on hipster beach with a book and a little bit of peace. Minutes later two guys set up an amp, a drum kit, and an electric guitar and started to play loud – as if they’d been playing all day and I was the one who just showed up out of nowhere.

Each song was rock-solid. Reminiscent of early White Stripes raw minimalism, without the candy. Crunchy guitar, weaving around smacking drums, bare and loud, for whoever was there to fall witness.

Fun fact: talented “street musicians” yield a better living than many musicians make playing gigs in bars. When the music is good, I’m just a lucky witness with a few dollars to cast as ballots. And these guys reminded me: rock saves. So I tossed a few votes toward the cause, as I do every time I encounter a street musician who moves me.

I approached the band, said thanks for the show, and the guitar player handed me a CD: The Ferocious Few. (tip: if you like the show, thank the band!) I went home and performed aural due diligence: I googled. Within seconds I learned the band only played outdoors in SF.  Which is to say: they were playing the streets, and regularly. Not legally, but they were playing shows, and lots of them.

Since my initiation at Dolores Park two years ago, The Ferocious Few have continued playing hundreds of shows in the streets of San Francisco, while connecting with San Francisco’s thriving independent music business & digital music community.

“It’s much easier to take in music than it is to rant, which I love to do, but giving it a guitar made it a beautiful rant.”I’ve seen their lead singer, Francisco at multiple music and music-tech conferences, learning new techniques to use online, and tirelessly, quietly letting everyone know which maybe-legal corner the band will play and when. “Come to our MySpace page” I’d hear him say “We’re on Facebook now too.”

With both analog and digital fever, The Ferocious Few developed an audience and began to reap the benefits of hard work in the streets. They continued writing large amounts of quality music, and building relationships with people who enjoy their music.

As the Ferocious Few approach a most important 1,000 True Fan marker online, they continue to make a living in the streets of the city, where they play regular gigs and create close relationships with their fans both online and offline while continuing to engage their prolific creative nature.

Now celebrating a recent signing to San Francisco’s own Birdman records, a new album (April 13, 2010), a highly rated Noise Pop show, and multiple gigs in Austin, TX during SXSW 2010 including the Bay Area Takeover and an official showcase, The Ferocious Few are one of San Francisco’s fastest growing, hardest rocking, most talented trailblazing bands – writing sweat worthy rock and roll and embodying a distinct relationship tenacity while literally pounding the streets with their labors of love. For The Ferocious Few, it’s really just about the music.

I caught up with Francisco, founder of The Ferocious Few, and we discussed the experience of going from life as a street musician to a locally breaking band with a record deal, digital strategy and clear opportunity ahead.

me: So, is Francisco your real name? Because when I look at you I only see San Francisco.

Francisco: I am Francisco Fernandez from Berkeley and my bandmate is Daniel Aguilar. (mumbles) He’s from Los Angeles.

Tell me how it started, because when I saw you set up and play in Dolores Park, I was blown away.

Well, Ferocious Few has been together since late 2005 when we formed band in Oakland with four people. (laughs) We played Stork Club and a few other shows, we even had residency at Missouri Lounge, we used to call it the “misery lounge.”

I didn’t know what I was playing and was also trying to lead the band. It was pretty bad. So I moved to SF and started playing with Daniel. We started jamming and he wanted to go down to Powell Street and play. We would practice at Lake Temescal.

I was going to protests in the Bay Area and I would see people with megaphones yelling about what’s wrong. which annoyed me, and I’d see drum circles which weren’t going anywhere, and I felt like the best way to be for the people was to be a ferocious band, maybe even with a message, because it’s much easier to take in music than it is to rant, which I love to do, but giving it a guitar made it a beautiful rant. It feels like a primal thing that needs to come out. We played once outside of the H&M on Powell, made $30 and realized we could do it everyday.

So you started making money.

Yep. We got smarter and started putting cds out there and stuff. And we got louder, too. I had a Fender can amp and graduated to a Crate amp. If you’re gonna get stopped, you might as well be loud, and then that 30 minutes is more profitable.

How loud is too loud when you are playing in the streets of San Francisco?

I saw two kids bring a Marshall stack to Powell Street, and that might be too loud. Maybe we’ll be the docile few after we reach success (laughs)

I hope not, I love the volume. So… you started playing around the city in the streets regularly. What is that like?

Yes. It’s a way of life and more than anything. It fed my creativity, I couldn’t stop. I started to create more, because people, they were listening. I started to watch people while we played, used it as a way to develop my music and learn how to write better songs. You can tell instantly by the reaction of the crowd if it’s a good song. I’d start watching the flow of traffic until everything becomes a blur except the song that I’m singing.

I saw you at SXSW 2009 and saw you are playing a showcase this year. As an independent band, what are your thoughts on SXSW?

We’ve played South by Southwest before. Because, I mean, we play in the streets and there’s only two of us. Last year we only had one gig through a battle of the bands. Playing the streets in Austin, not the gig, paid for our Austin plane tickets and car, we left with a profit. I mean, bands should know it doesn’t matter where you are, inside or outside of the event. If you are good, people will stop to listen you.

We will be there, and we’re playing The Bay Area Takeover. We also got an official SXSW showcase.

How many shows, approximately, have you played?

“I’d start watching the flow of traffic until everything becomes a blur except the song that I’m singing.”Six hundred. I was playing 200 something at one point, and then 1-4 shows a day. I have a few calendars from a year ago – we got every single art walk, farmers market, and also play at BART, and other spots, so I didn’t have to get a job. I didn’t want to work for someone else because every hour I work for someone else hurts my band. I am now surviving and paying rent.

We play less shows now b/c I’m trying to conserve my health. I would lose my voice after 7 months in a row and so now I’m trying to only play the right times. I’m going to start playing everyday again because the weather is going to get better and I’m in fund raising mode for my tour. Just like they have “save California” people on the street, I’m raising money for our tour.

Tell me about your love affair with San Francisco’s music scene.

I felt like the SF scene was impossible to break in to for the first two years of playing, but in the last year it seems like everybody has started to want to book us and now I have options so I’m starting to enjoy it more.

I worked at a woodshop for a few years and it was really good to learn how to make handmade crafts and awesome tools from the industrial era, and I wanted to take that work ethic and put it into music. My dad is in bands, my family members have been in bands. If I’m going to be serious then I have to invest fully. I want to play every single day.

Where is the best burger in SF?

Where is the best burrito in SF?

I stopped drinking but I’ve started taking vegan liver rescue. After developing the band we started taking risks but now that I have an album and I have other people working on it other than me and my bandmate I feel a responsibility to be a representative of everyone’s hard work, so I had to get rid of the bad attitude.

I would love to have a beer again, but not until I am celebrating something. When I think about touring, I realize I’m leaving my safety zone, I know I play in the street, but I guess I just want to create a good vibe. This whole mission and having an opportunity to tour is a way to meet new friends and meet new people and alcohol makes it harder to interact with people in the long run.

I don’t like booze that much anyway, it’s more of a social thing. I want to have myself collected when I go into new venues, meeting owners, doing interviews, talking to people, and I just don’t see it working with booze. When I was playing on the street a lot I wanted to drink every night because it relieved the pain in my feet.

If you look at other people who die young, and musicians, alcohol just doesn’t bode well. it’s a science experiment and you don’t need too many variables. The music isn’t suffering because I am more empowered and present.

What are your rants?

I’m gonna save my rants til I’m famous so I can get put on commercial radio. I want the FCC to like me. I want to be one of the 40 bands they like.

Learn more about The Ferocious Few on myspace and facebook, and check out the Bay Area Takeover at SXSW 2010.

The Ferocious Few will also be at these locations during SXSW 2010: