We stopped into Elixir at about midnight. I’ve never been, and we both agreed it was Sausage-festy. A guy with a half-zip sweater is sorta leaning on me, and talking with other half-zipped sweaters. The doors were wide open on that freezing Friday night. The jukebox was internet. We still rocked our heads to the Stones and Smashing Pumpkins. I almost expected The Breeders’ “Last Splash” to come on, but no go. We discussed music, I kept my utter disdain for the internet box at a minimum, and after a lengthy discussion at which Stones song was the best, suggested we go to Gestalt.

It’s Gestalt at about 1:15am. The jukebox is off. A DJ is playing “We Didn’t Start the Fire”. We watch drunk hussies dance. There’s an Asian girl passed out in a chair, her testosteroned friends laugh.

The DJ was laughing at his own musical choices. I lovingly eye the dark jukebox, wishing I could play that instead. Though I remember once, I played two songs here and we had to stand right next to the thing to hear any kind of tune.

So that was a bust, and I’ve been hankering for some juke ever since, but have been busy with my new Swiss boyfriend, air-drumming to Zeppelin, cruising down Highway 1.

Strangely, my hankering was somewhat abated by seeing Zoo Station, a U2 tribute band, as well as Stung, a Police tribute band. Not really a fan of U2, but I guess there is one downside to dating Euros. 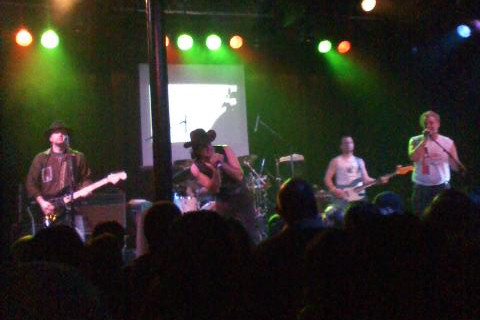 As cheesy as all this sounds, the show I went to was quite a lot of fun. It was a surreal experience, watching a fake band on stage playing typical jukebox songs from bands that are typically on jukeboxes.

Stung played “Every Little Thing She Does is Magic“, and all the girls went nuts, including me! We sang and danced with our beers in our hands – just like if the song was played on a jukebox at a bar.

A conversation about the show prompted my co-workers to tell me about the many tribute bands that play in San Francisco. There are ones for Depeche Mode, one for the Go-Gos, the Cure, and so on.

I’m wondering in this day and age, when people’s lives are too busy or changing or they don’t want to deal with smelly arrested developments or internet jukes or half-zipped sweater guys leaning on your arm, seemingly desperate to get away from their nagging wife on a Friday night — are tribute bands the new jukebox?